WE’RE HAVING A BABY! 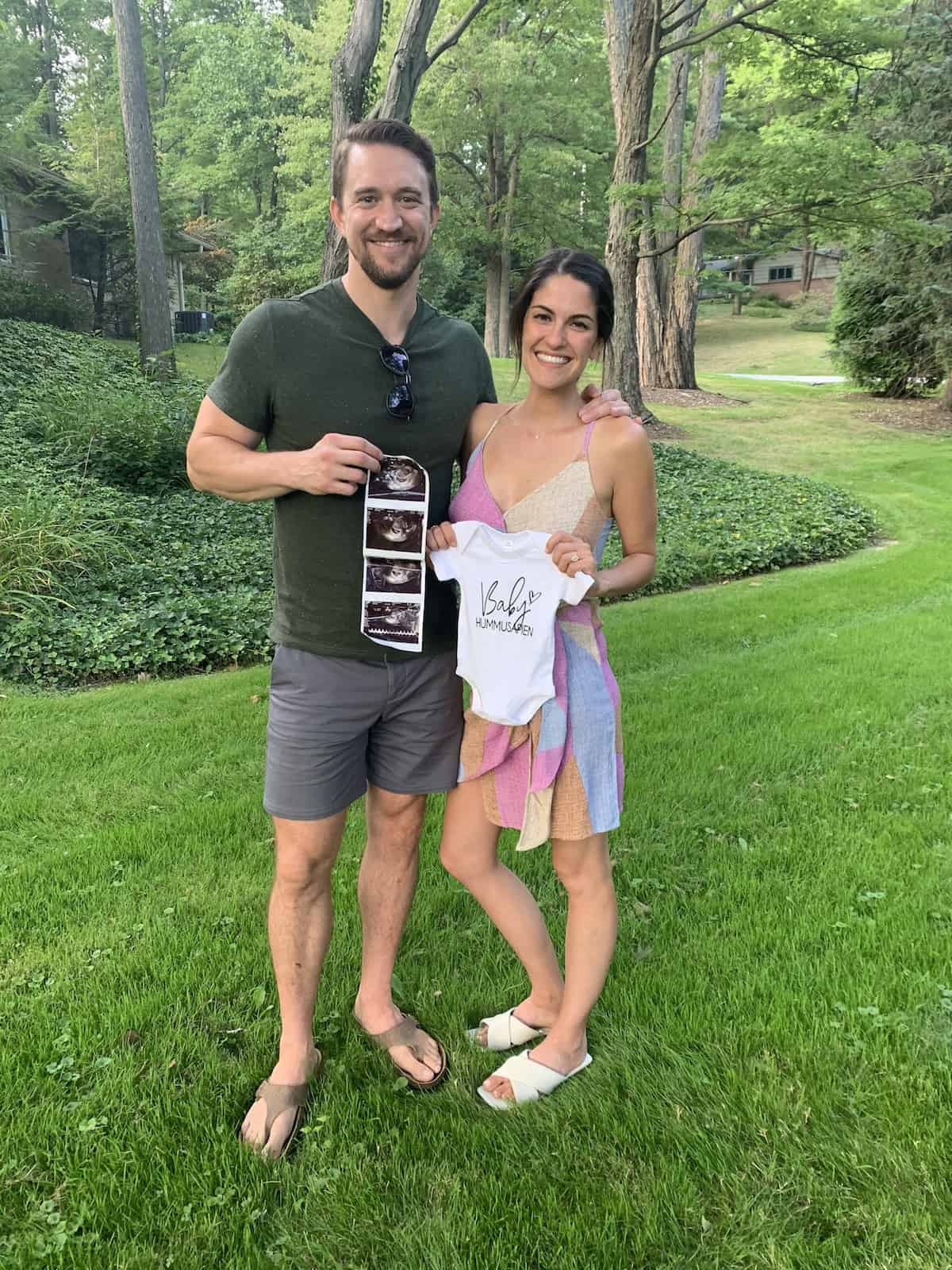 Holy moly, am I ecstatic to reveal the gigantic yet teeny tiny secret that we’ve been keeping for 16 weeks now. Most of you now know from Instagram that Jeff and I have a little one coming February 1st! #babyganoush

Pregnancy is such a gift, one that unfortunately that doesn’t come easily for all. I’ve watched friends near and far struggle with fertility. My heart goes out to all the mamas and mamas-to-be out there on their own journey to conceiving!

We started trying about a month after we got married in our living room. We’d rescheduled our wedding from the original March 28, 2020 date to September of 2021, and we knew we didn’t want to wait a year and a half to start trying to get pregnant.

I grew up babysitting every weekend and working each summer as a camp counselor, always dreaming of one day becoming a mom. I still can’t believe that in six months, I’ll be one!

Rest assured that the content of this blog will stay the same. I will continue to share predominantly recipes with tidbits of baby updates along the way. Similar to how I share a peek of Alchemy restaurant life when we open new locations, I’ll keep you in the loop while respecting that you’re likely here for the food versus my personal life.

In today’s post, I’m getting into the nitty gritty details of the first trimester, from my physical and mental symptoms to cravings, aversions, prenatal vitamins, exercise, books, and product favorites. I hope this content is helpful for all the mamas-to-be out there!

How We Found Out

I could tell I was pregnant pretty much right after we conceived, long before we knew for sure. My body started feeling really different (hello, sore boobs) and my hormones were through the roof. I told my mom multiple times on the phone that I was sure I was pregnant!

I took a pregnancy test on a Friday, a few days before my missed period. It was negative, but I knew my body and still had a huge hunch that I was indeed pregnant. I waited until Monday when I was due for my period and took another test. It was positive, and I screamed! Jeff ran upstairs and we jumped up and down. It was the sweetest moment ever seeing that huge smile on his face!

At about four weeks pregnant, just a couple weeks after we found out, I was hit with a spell of depression. At a time when I wanted nothing more than to be excited about our sweet pea, I was overwhelmed with sadness. I’d wake up each day crying and feeling crazy anxious, wanting each day to end before it began. I wrote down thinking, “How can I feel this low after finding out something so amazing only a week ago?”

I could barely get out of bed, let alone work. I felt worthless and hopeless. Thankfully these feelings only lasted a couple weeks. Hormones, I tell ya! By about week 10, I was feeling far better mentally, albeit still pretty gross physically.

If I could describe the first trimester in one word, it would be “icky.” I only threw up a handful of times—it wasn’t nausea that plagued me each day. Rather, it was this overall feeling of malaise, like I was sick all the time. I just felt gross. Also my boobs were so achey and sore in the beginning that I couldn’t even walk down the stairs without a bra holding them in place!

Tired doesn’t begin to describe the exhaustion, another textbook pregnancy system that I underestimated. I vividly remember one weekend when I barely left my bed for the entire weekend. I just had zero energy. I let myself lay in bed pretty much all the time early on.

Feeling so lousy and unlike myself physically didn’t help me mentally, either. I was overwhelmed by all the new feelings and desperate to feel like myself again.

The worst symptom I experienced aside from the malaise was bloating, burping, and indigestion, which started around week 8 but came on hot and heavy in weeks 10-12. It was discomfort unlike anything I’d ever experienced before, with constant “gurgling” and stomach unease. It hit the worst later in the day and was especially bad if I ate a larger meal.

I seriously looked 20 weeks pregnant in my second month of pregnancy, which is why so many if you thought you saw a bump so early on! I’m so glad that this mostly faded a couple weeks into the second trimester.

I did experience some insomnia in the early weeks as well, but that didn’t last long. 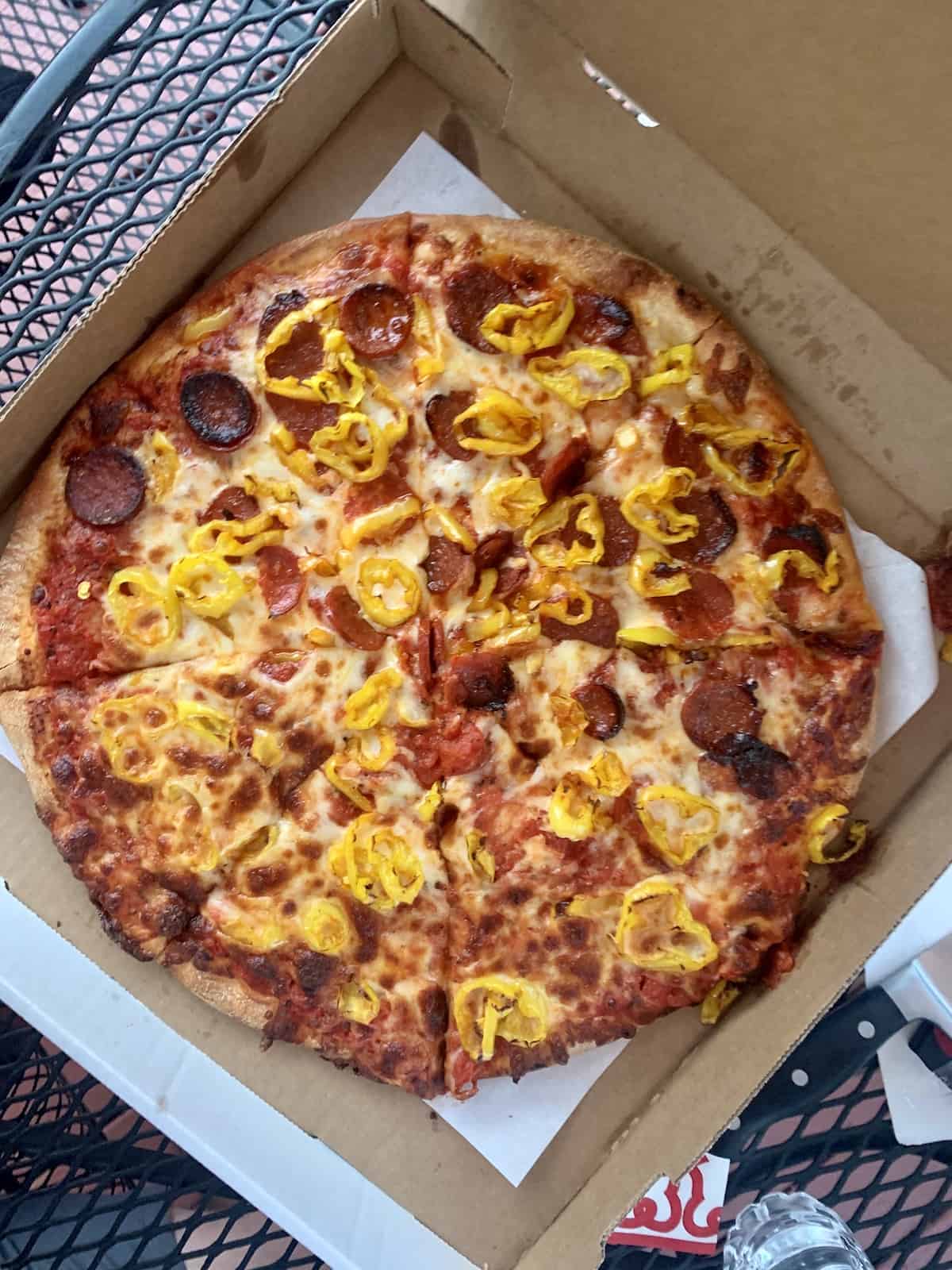 Dairy and carbs defined my first twelve weeks. I ate things I hadn’t eaten in years. I’ve never been more grateful for my intuitive eating journey because pregnancy is the ultimate test of listening to your body.

Growing a human is no easy feat. It requires endless amounts of energy, so it makes perfect sense to me that in the beginning when the most major development is happening, you crave tons of carbs. Even though what I wanted felt foreign, I knew all I had to do was listen to my body.

In the early weeks, my diet was pretty much cereal (I should have stock in Cheerios), bagels, plain oatmeal with blueberries, cottage cheese with wheat crackers, and pizza. As the weeks went on, I craved tons of fruit (especially frozen mango), yogurt, sushi, grilled cheese, tomato soup, and matzo ball soup.

The dairy cravings stopped around week 9 and my diet started to normalize a bit. By week 12 my strongest craving was grape leaves dipped in hummus. So random! Anything acidic was amazing.

The most surprising craving I’ve had and still have is for meat. Now I don’t believe that you crave what you’re deficient in. I eat a balanced diet and take a prenatal vitamin. I get plenty of iron and protein. I believe that now more than ever, I’m listening to what my body wants more than my mind, and eating without fear of breaking a label or identity.

I love eating plants, and eating meat doesn’t change that. I’d be lying if I said I didn’t feel guilt. It’s crazy to build a brand around something and then feel almost like you’re betraying your foundation. But my manta has always been that we know our bodies best. To eat one way solely because you’ve done it for so long is not a valid reason. We were made to evolve, and I’m not who I was five years ago.

I’ve eaten corned beef sandwiches, bacon, pepperoni pizza, Trader Joe’s smoked deli turkey, a delish hot dog at my parents, and a bite of a burger. I never craved chicken itself, but I craved chicken broth and soup that tasted like chicken. These aren’t necessarily daily or weekly occurrences, but more random cravings here and there.

Meat hasn’t dominated my diet and I don’t plan on it being a large part of my diet post pregnancy; but that’s for my body to decide when the time comes. It feels freeing being honest with you all about this transition and not “hiding” the fact that ate corned beef. I have to keep reminding myself that I’m not violating any rules here.

Let me tell you…it was so tough writing Lovely Meals Lately in those early weeks when my diet looked like that of a five year old. I had to go through old photos just to have enough content! Too funny.

I wanted nothing to do with many foods I normally love, like coffee, eggs, peanut butter, and vegetables. And there’s no forcing it! I had to surrender to what my body was saying and quiet any guilt I felt for not wanting nourishing foods.

In the early weeks, I was averse to sweets and anything savory for breakfast. I normally have dessert every night but I wanted nothing to do with it. (I’m back to loving sweets now, don’t worry!)

By week 10, I wanted nothing to do with water. I only wanted orange juice. I couldn’t drink water unless it had tons of ice and lemon in it.

I take Garden of Life Raw Prenatal (I get the 180 count that lasts two months) and Nordic Naturals Prenatal DHA since the prenatal doesn’t contain DHA. I only take one of the DHA pills a day (each pill has 240mg) since that meets the 200mg daily DHA requirement. Nordic Naturals also has a Vegan Prenatal DHA if that’s of interest!

I started taking the prenatal about a month before we started trying. The only thing I hate is that the prenatal is three big pills, which is common. I really struggled with them in the first trimester, but they’re not as icky to me now.

I’ll be honest…I didn’t move very much in the beginning. Jeff and I would go for short walks which we usually end in me whining that I can barely move and complaining that I’m a bump on a log and him offering to carry me. LOL.

When I had energy, I would do a Butcher Shop reformer pilates class. The studio has been a godsend before and after finding out I was pregnant. I’ve been taking classes there for almost two years now and I just adore how challenging and functional the workout is.

It makes me feel so much stronger, the instructors are also amazing, and it’s easily adaptable. As I get further along, I’ll stop doing abs and replace those moves with arm and leg exercises. I’ve been going to Butcher Shop three times a week for my formal “workouts” and then walking on the other days.

I honestly can’t imagine going to the gym these days and creating my own workouts. I just don’t have the mental energy. Before I got pregnant when gyms were closed, I was running outside a lot and I loved that. These days, my bod has zero desire to run so I haven’t in months.

I do my best to go on at least one long-ish walk each day to keep my bod moving.

I’ve had a fair amount of experience with babies and kids, so I knew going into pregnancy that I wouldn’t be reading a bunch of parenting books. I’ve learned that pregnancy is like an open invitation for the world to tell you what to do and not to. I’ve been firm from the get-go that I want to be a chill pregnant person, which means doing my best to drown out the noise.

I did read Bringing Up Bebe, which is more of a story with research and advice on french parenting versus a dry “this is how to raise a baby” book. It was super entertaining and I really enjoyed it! It’s aligned with how I want to parent and my goal to raise a patient, explorative child that doesn’t think he/she is the center of the universe.

The only part I didn’t like was the diet talk, but that was easy to tune out.

The second trimester has been an absolute walk in the park compared to the first. I finally can drink hot coffee, eat the foods I love, and feel generally more like myself. More on that in the next post!

Questions? Comments? Throw ’em at me!