Fake Facts Are Flying About Coronavirus. Now Theres A Plan To Debunk Them 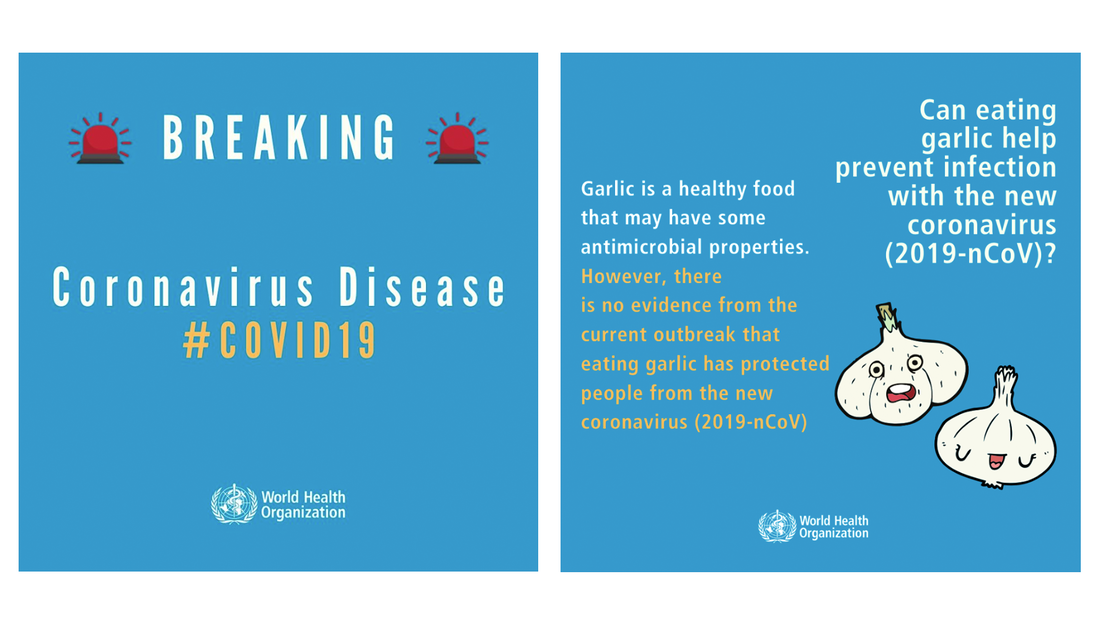 These are examples of posts that the World Health Organization is sharing on its social media to debunk widely circulated rumors about coronavirus cures. 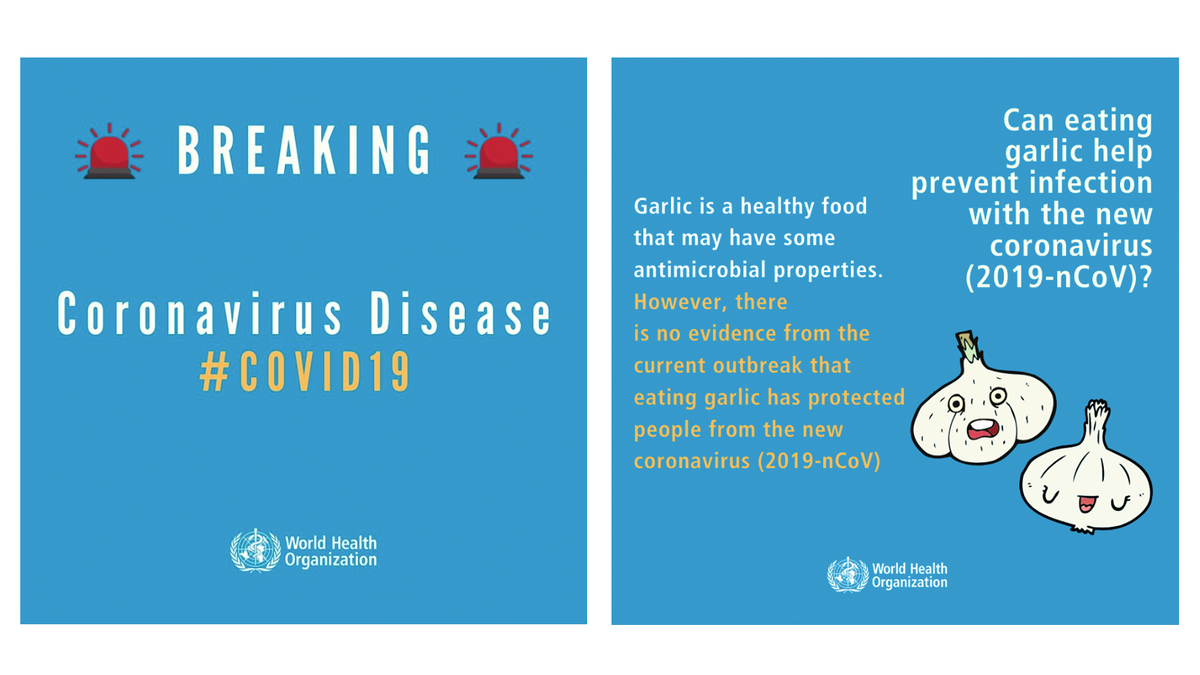 These are examples of posts that the World Health Organization is sharing on its social media to debunk widely circulated rumors about coronavirus cures.

The coronavirus outbreak has sparked what the World Health Organization is calling an “infodemic” — an overwhelming amount of information on social media and online sites. Some of it’s accurate. And some is downright untrue.

The false statements range from a conspiracy theory saying that the virus is a manmade bioweapon to the claim that more than 100,000 have died from the disease (as of this week, the number of reported fatalities is reported at 2,200-plus).

WHO is fighting back. In early January, a few weeks after China reported the first cases, the U.N. agency launched a pilot program to make sure the facts about the newly identified virus are communicated to the public. The project is called EPI-WIN — short for WHO Information Network for Epidemics.

“We need a vaccine against misinformation,” said Dr. Mike Ryan, head of WHO’s health emergencies programme, at a WHO briefing on the virus earlier this month.

While this is not the first health crisis that has been characterized by online misinformation — it’s happened with Ebola, for example — researchers are especially concerned because this outbreak centers in China. The world’s most populous country has the largest market of internet users globally: 21% of the world’s 3.8 billion internet users are in China.

And fake news can spread quickly online. A 2018 study from MIT found that “false news spreads more rapidly on the social network Twitter than real news does.” The reason, say the researchers, may be that the untrue statements inspire strong feelings such as fear, disgust and surprise.

This dynamic could cause fake coronavirus cures and treatments to fan out widely on social media — and as a result, worsen the impact of the outbreak, says Bhaskar Chakravorti, dean of global business at the Fletcher School at Tufts University. Over the past decade, he’s been tracking the effect of digital technology on issues such as global health and economic development.

The rumors offer remedies that have no basis in science. One untrue statement suggests that rubbing sesame oil on the skin will block the coronavirus.

If segments of the public turn to false treatments rather than following the advice of trusted sources for avoiding illness (like frequent hand-washing with soap and water), it could cause “the disease to travel further and faster than it ordinarily would have,” says Chakravorti.

There could be a political agenda behind the fake coronavirus news as well. Countries that are antagonistic toward China could try to hijack the conversation in hopes of creating chaos and eroding trust in the authorities, says Dr. Margaret Bourdeux, research director for Harvard Belfer Center’s Security and Global Health Project.

In the instance of vaccines, Russian bots have been identified as fueling skepticism about the effectiveness of vaccination for childhood diseases in the U.S.

The World Health Organization’s EPI-WIN team believes that the countermeasure for misinformation and disinformation is simply to tell the truth.

It works rapidly to debunk unjustified medical claims on social media. In a series of bright blue graphics posted on Instagram, EPI-WIN states categorically that neither sesame oil, not breathing in the smoke of fire or fireworks, will kill the new coronavirus.

The approach, says Melinda Frost, an officer on the EPI-WIN team, is based on the idea that employers are the most trusted institution in society, a finding reflected in a 2020 study on global trust from the public relations firm Edelman: “People tend to trust their employers more than they trust several other sources of information.”

Over the past few weeks, Frost and her team have been organizing rounds of conference calls with representatives from Fortune 500 companies and other multinational corporations in sectors such as health, travel and tourism, food and agriculture and business.

The company representatives share questions that their employees might have about the coronavirus outbreak — for example, is it safe to go to conferences? The EPI-WIN team gathers the frequently asked questions, has their experts answer them within a few days, then sends the responses back to the companies to distribute in internal newsletters and other communication.

Because the information is coming from their employer, says Frost, the hope is that people will be more likely to believe what they hear and pass the information on to their family and community.

Bourdeux at Harvard calls this approach a “smart move.”

It borrows from “advertising techniques from the 1950s,” she adds. “They’re establishing the narrative before anybody else can. They are going on offense, saying ‘here are the facts.’ “

WHO is also collaborating with tech giants like Google, Twitter, Facebook, Pinterest and TikTok to limit the spread of harmful rumors. It’s pursuing a similar tactic with Chinese digital companies such as Baidu, Tencent and Weibo.

“We are asking them to filter out false information and promote accurate information from credible sources like WHO, CDC [the U.S. Centers for Disease Control and Prevention] and others. And we thank them for their efforts so far,” said Dr. Tedros Adhanom Ghebreysesus, director-general of WHO, in a briefing earlier this month.

Google and Twitter, for example, now actively bump up credible sources such as WHO and the CDC in search results for the term “coronavirus.” And Facebook has deployed fact-checkers to remove content with false claims or conspiracy theories about the outbreak. Kang-Xing Jin, head of health at Facebook, wrote in a statement about one such rumor that it has eliminated from its platform: that drinking bleach cures coronavirus.

Chakravorti applauds WHO’s coordination with the digital companies — but says he’s particularly impressed with Facebook’s efforts. “This is a radical departure from Facebook’s past record, including its controversial insistence on permitting false political ads,” he wrote in an op-ed in Bloomberg News.

Still, there is no silver bullet to fighting health misinformation. It has become “very, very difficult to fight effectively,” says Chakravorti of Tufts University.

In addition to efforts by WHO and other organizations, individuals are doing their part.

On Wednesday, The Lancet published a statement from 27 public health scientists addressing rumors that the coronavirus had been engineered in a Wuhan lab: “We stand together to strongly condemn conspiracy theories suggesting that COVID-19 does not have a natural origin …. Conspiracy theories do nothing but create fear, rumors and prejudice that jeopardize our global collaboration in the fight against this virus.”

Dr. Deliang Tang, a molecular epidemiologist at Columbia University’s Mailman School of Public Health, says his friends from medical school and his research colleagues in China find it difficult to trust Chinese health authorities, especially after police reprimanded the eight Chinese doctors who warned others about a pneumonialike disease in December.

As a result, Tang’s network in China has been looking to him and others in the scientific community to share information.

Since the outbreak began, Tamg says he’s been answering “30 to 50 questions a night.” Many want to fact-check rumors or learn about clinical trials for a potential cure.

ShareTweet
Comments Off on Fake Facts Are Flying About Coronavirus. Now Theres A Plan To Debunk Them