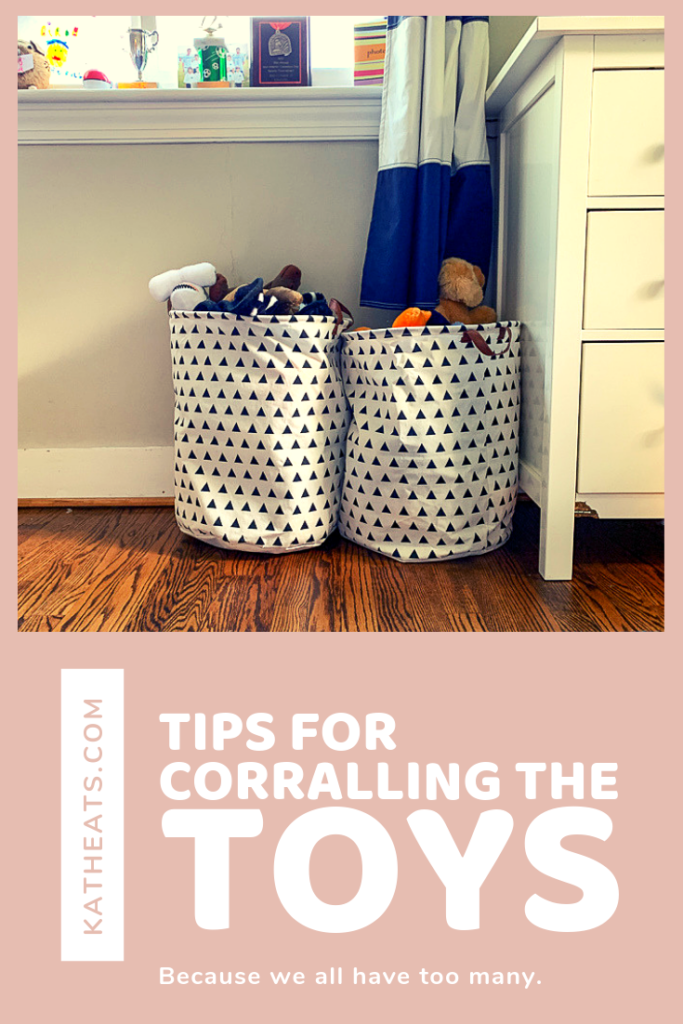 I asked Instagram a few weeks ago if there were any Home Neat Home topics you guys would like me to write about. Almost all of the responses had to do with organizing toys! (Also I don’t think I have ever shared a tour of this kitchen, so I will plan to do that soon.)

If you walk into my front door at any given moment, you will not see toys everywhere. We do have a doorway bouncer for Birch in the kitchen, but otherwise toys are designated to certain areas and within those areas, certain containers. The only toys that are in the living room are Birch’s quilt and baby toys which tuck neatly into a nice basket. I get out his quilt and toys several times a day and clean them up when we’re done for the time being. 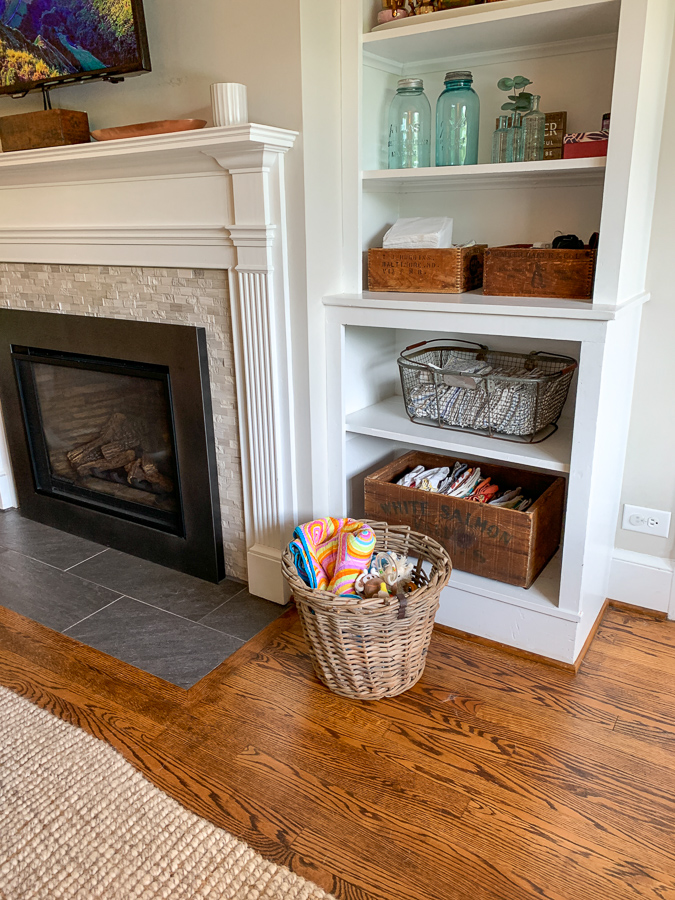 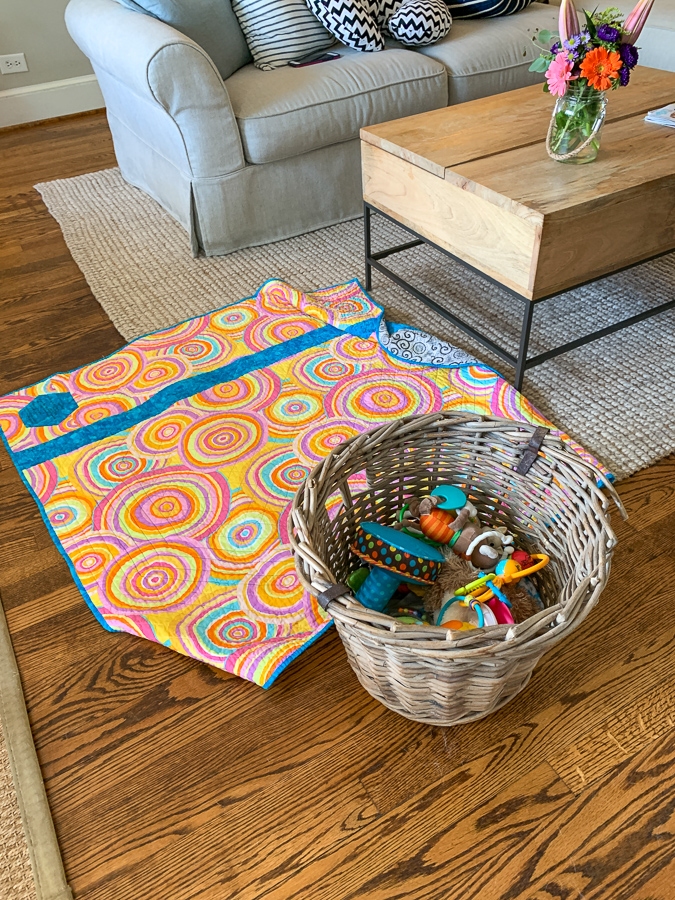 All of the other toys (the big boy toys are 1,000 x what the little boy toys are!) are in Mazen’s room and our downstairs playroom. Obviously Mazen is allowed to take his toys wherever he wants in the house to play with them, but they can only stay out through the end of that activity period or day and he has to put them away before bath/dinner/bed. I have always modeled good tidying and cleaning up, so he is pretty good about not dragging toys all over the house. When he does bring more than a few toys out, he will ask for my help cleaning them up and I help him rather than digging my heels in and making him do it all by himself. Again: modeling the tidying.

Tip 2: Have One Spot For “Games In Progress”

Ideally behind closed doors! Mazen does not have to clean up his playroom and can leave his Legos out all over the floor if he wants to keep playing the next day. This playroom is new-ish to us (used to be an office and guest room), and the inspo for changing it to toy room was 100% so that he could leave things out longer term and out of his little brother’s reach (eventually). If you don’t have a separate playroom, I would designate a certain area of their bedroom room as a “leave out longer term” area, like on a train table. And I would not make the leave-out place your main living room!

Our basement toy zone on a normal day 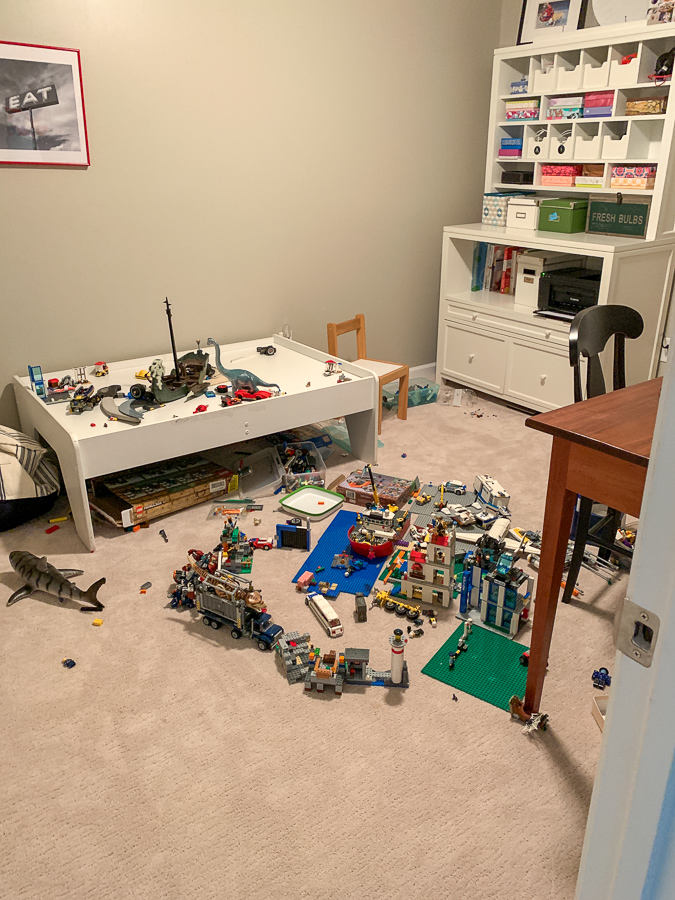 Tip 3: In The Designated Areas, Have Good Storage Bins 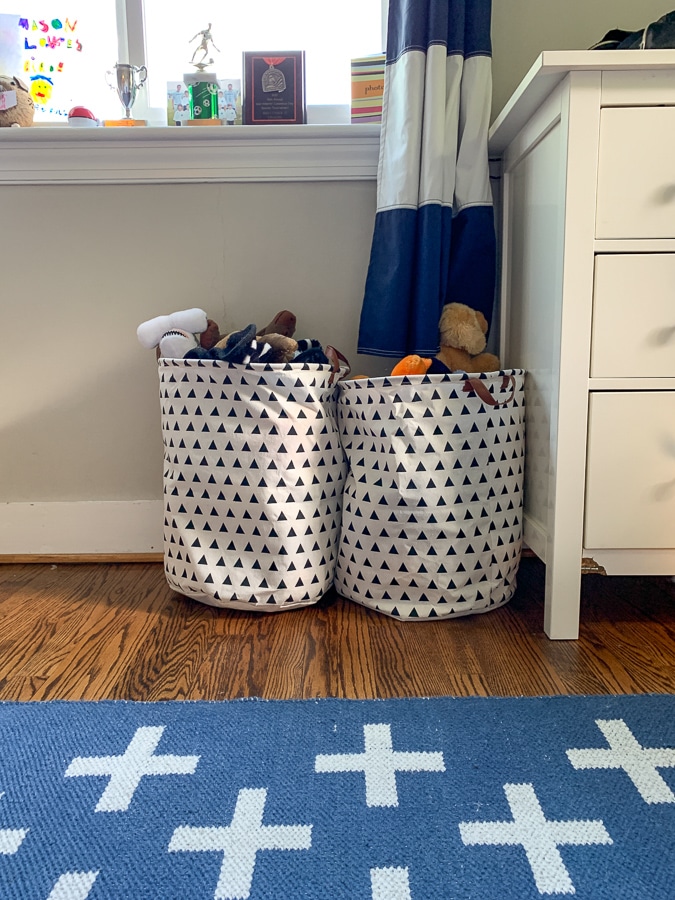 Mazen keeps his room fairly tidy because everything has a place. Occasionally his desk gets messy with clutter / small items, but overall his floor is clean. It’s very easy for him to toss his animals in the bins after playing or put a game / bat cave / cash register / marble run / etc. back into his closet. 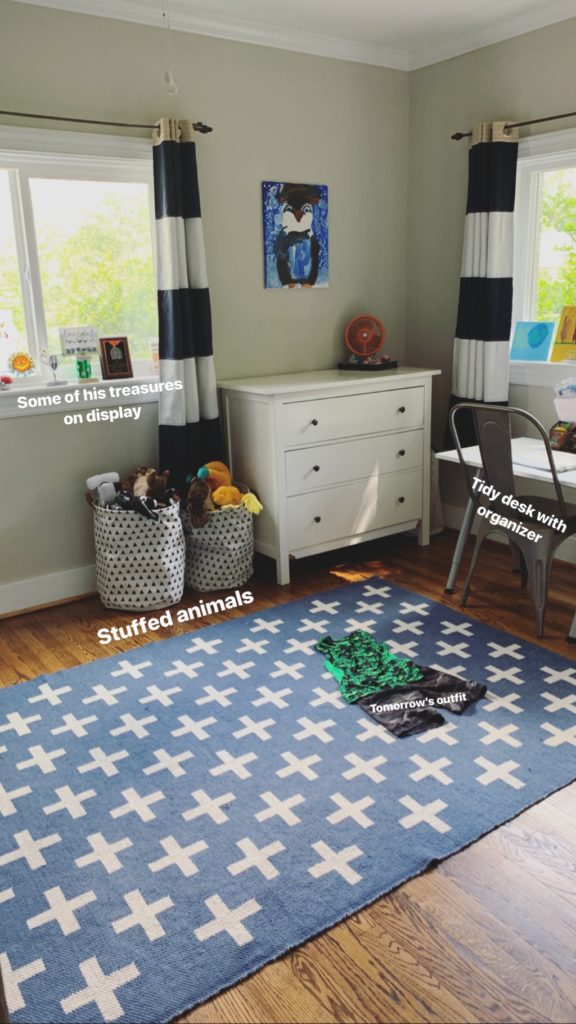 The black and white storage bins from Amazon are great!! I have at least four of these in my house, two for laundry and two for toys. If Grammie keeps giving Mazen stuffed animals, I’m going to have to buy a third! They are so inexpensive ($11 each) and come in a million really cute patterns. I love the look of black and white. So far they are holding up very well. Mazen has two for his stuffed animal collection. We also have a book crate out in his room, and then he has a cube organizer in his closet. We TRY to keep like toys with like, so bins for play-doh, kitchen toys, dress-up costumes, etc. 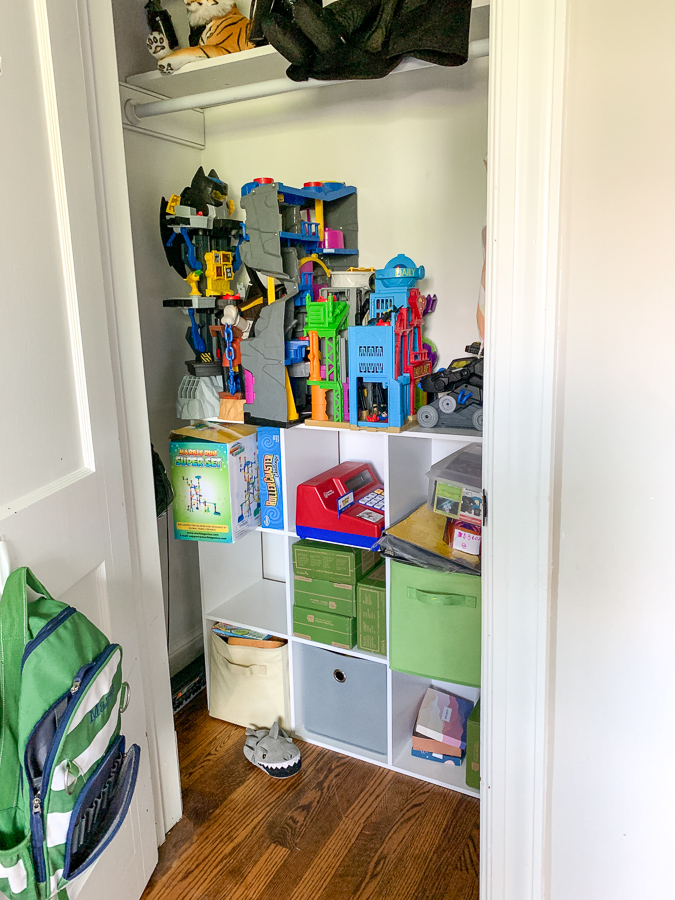 We also try to play with like toys together so as not to mix them up.

So if Mazen is playing a creative game with his play food and then decides he wants to switch to the marble run, we put away the food first. Sorting toys back by category takes SO long. This is really only a problem sometimes when Mazen has playmates over and they take toys out without cleaning up the first group. So occasionally we do have to re-sort, but not that often, as Mazen is also good at showing playmates how we clean up one zone before moving to another. Sure, sometimes I have to remind him/them when they get excited and on longer play dates we have more to tidy up at the end after the playmate leaves, but day-to-day it’s not a problem.

Lest you think I am a toy sergeant, sometimes it does get really messy over here. And when I notice that happening I just chip in and help out myself so the kids can move on faster to their next activity.

Tip 4: Have A Few Catch All Areas

Mazen has a treasure box where I toss all small toys that he brings home from birthday parties or buys on his own, etc. It’s a quick way to corral all of his little treasures into one spot. Nothing goes together, but they are all in the “small but favorites” category. 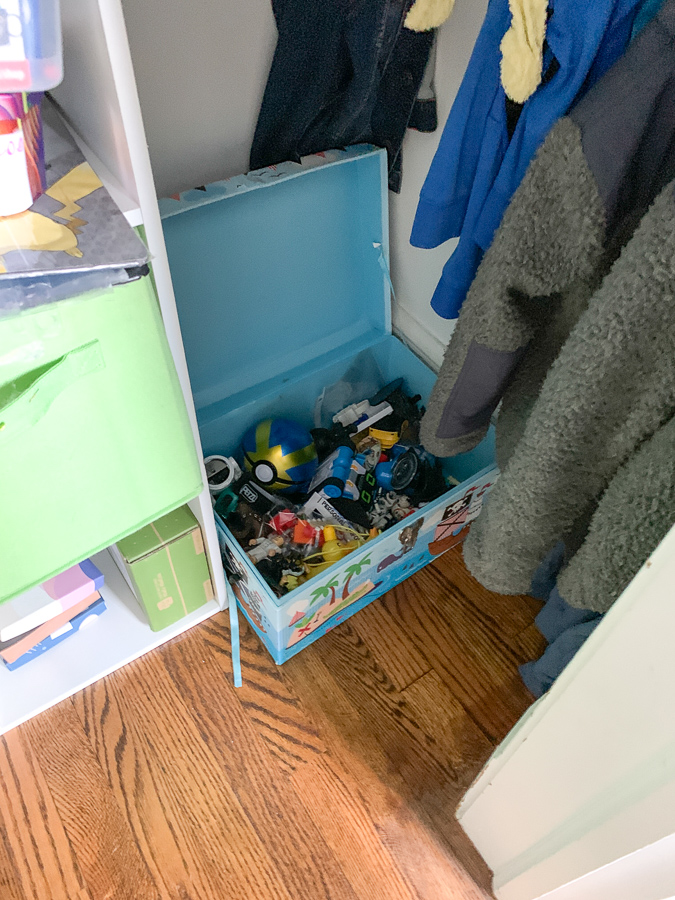 Birch has a little catch-all basket up in our room for when he plays on the floor up there. Bins + baskets FTW. 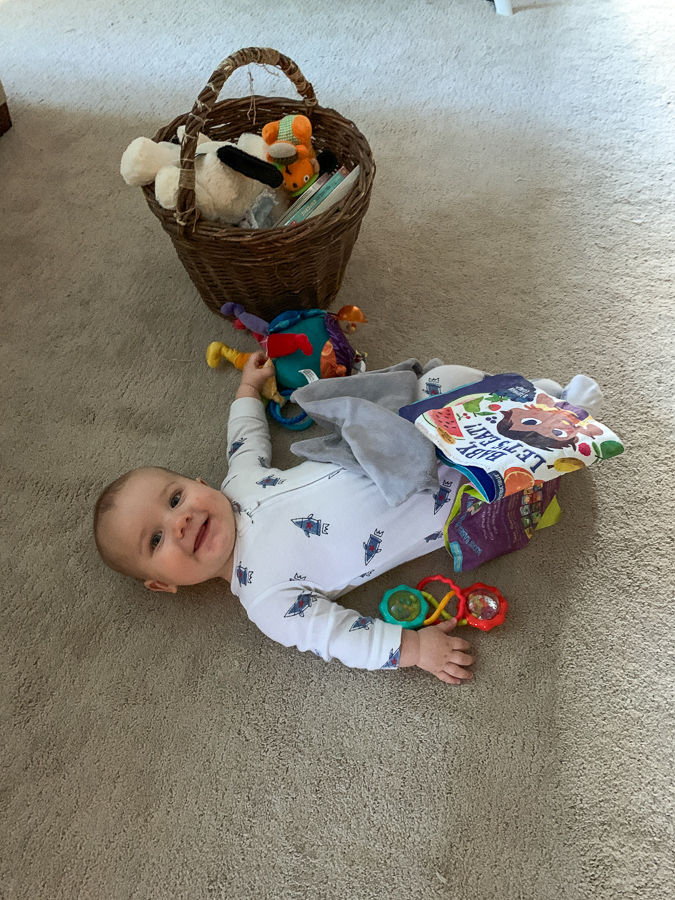 And finally, the number one secret to organizing is to minimize, so about once a quarter I go through and donate/toss anything that is broken, dried out, used up, or otherwise no longer an active toy. Sometimes I donate toys that are still good but I rarely see him playing with. If you have the space (say in your garage or just in your trunk for a few weeks) don’t donate anything right away in case they notice and ask for it! Sometimes I’ve been surprised by what Mazen has and hasn’t asked about. “Where’s my red rubber band with a paper clip on it?!”

Worst case scenario you can go buy another one

Our most played with toys over 6.5 years:

= all the stuff that involves imaginative play. The more specific toys are the ones that are most likely to get forgotten.

What are your best toy storage tips!?