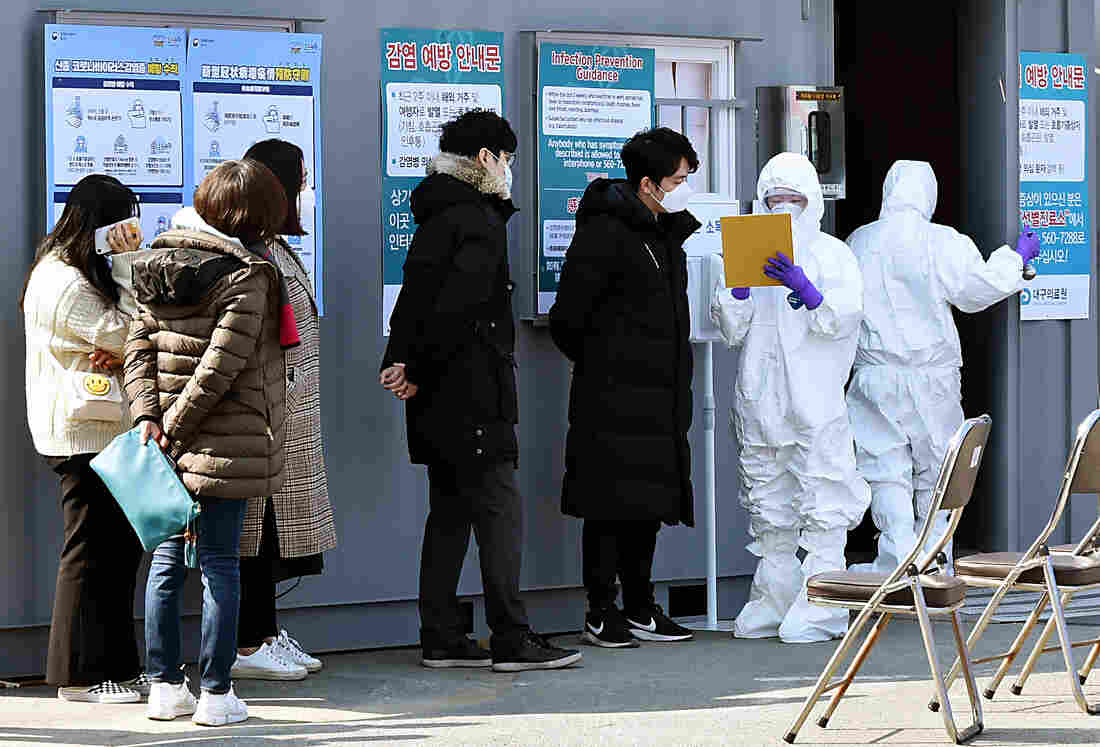 People suspected of being infected with the coronavirus wait for diagnostic tests at a medical center in Daegu, South Korea. 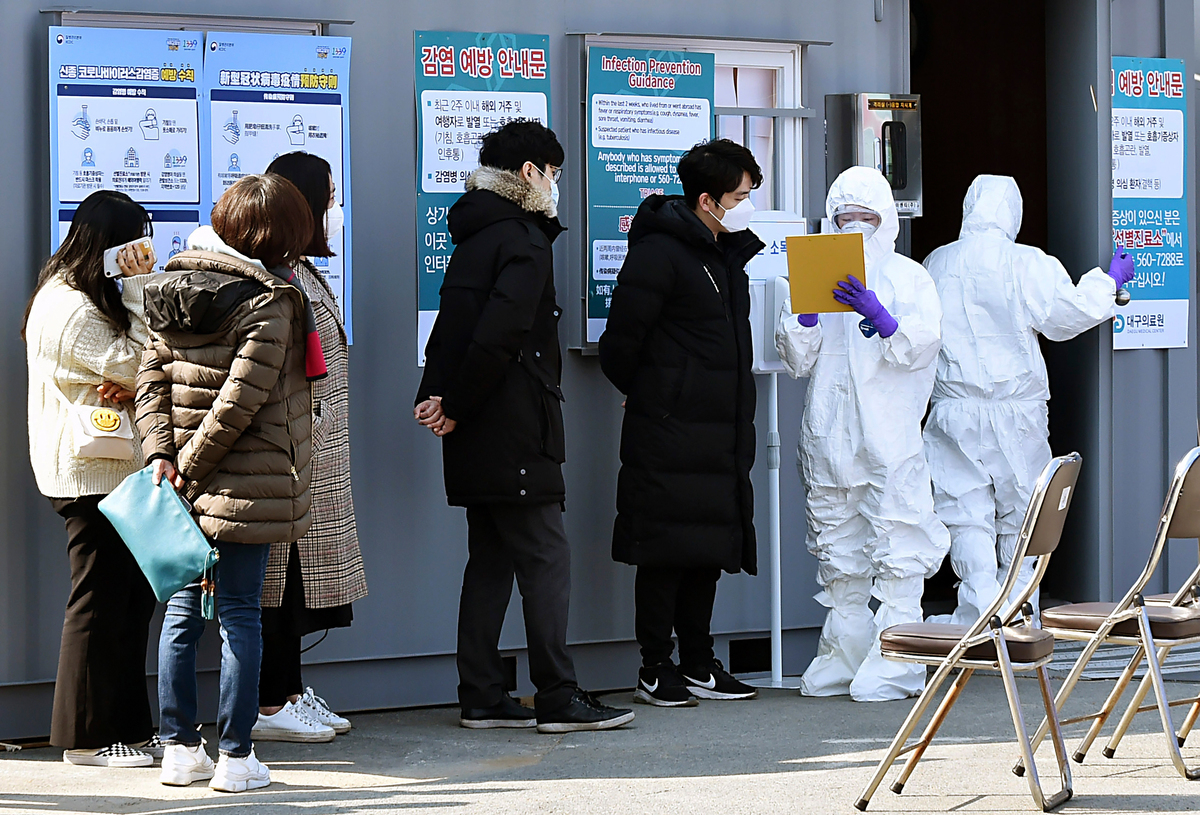 People suspected of being infected with the coronavirus wait for diagnostic tests at a medical center in Daegu, South Korea.

South Korea’s government says it is in a critical struggle to contain the spread of the COVID-19 virus from the disease’s epicenter in Daegu. It has given itself four weeks to stabilize the situation in the country’s city of 2.5 million, some 150 miles southeast of the capital, Seoul.

“If authorities fail to contain the spread of the COVID-19 in Daegu, there is a high possibility that COVID-19 could spread nationwide,” vice health minister Kim Gang-lip told reporters on Monday.

Most of South Korea’s 833 cases, as of Monday, are in Daegu. And most are connected to an obscure religious group called the Shincheonji Church of Jesus.

Case numbers doubled for several days in a row last week. The virus spread to every major city and province in the country. As a result, the government on Sunday raised the country’s virus alert level to red, its highest, for the first time since 2009. This gave authorities the power to shut down schools and restrict flights in and out of the country. It also advised all citizens showing symptoms of respiratory ailments or fever to stay away from work and school and self-quarantine.

It’s not clear how many South Koreans will heed that advice. And it’s highly unlikely that Seoul could impose draconian restrictions, locking down entire cities as in the case of China, says Kim Woo-joo, a doctor in the department of infectious disease at Korea University’s Guro Hospital in Seoul.

“South Korea is a liberal democracy with the freedom of movement,” he says. Besides, he says, “any lockdown now would already be too late, since Daegu is a transport hub through which many people have already passed.”

“The government and health authorities’ response has always been one step behind,” he adds.

While neighboring Japan has expanded its ban on travelers from China’s Hubei province to include eastern Zhejiang province, for example, South Korea has not followed suit. More than half a million people petitioned South Korea’s presidential office last month to ban all visitors from China, but Seoul has balked, apparently for economic and diplomatic reasons.

Despite the surge in case numbers, Kim does not believe the current situation warrants panic or despair. He points out that South Korea’s well-regarded national health system has a solid track record of containing epidemics, including SARS (severe acute respiratory syndrome) in 2003, H1N1 in 2009 and MERS (Middle East respiratory syndrome) in 2015.

One reason case numbers appear to have grown rapidly is because of the country’s ability to test large numbers of people quickly. As of Monday afternoon, the health authorities had tested 31,923 people, with 20,292 tests coming back negative and 11,631 results still pending.

Other countries which claim they have no cases, Kim says, may actually lack the ability to detect them.

“If the government, medical system and the people of South Korea organize the resources we have well and cooperate, then we can fully defeat this outbreak, and it will eventually come to an end,” he says.

Health authorities are also focusing resources on the Shincheonji Church of Jesus, founded in 1984 by charismatic pastor Lee Man-hee, whose followers, estimated at up to 240,000 worldwide, believe he is the messiah. Shincheonji is Korean for “new heaven and earth.” Its critics say it’s a cult.

Authorities are not sure how the disease was first transmitted to the group, but investigators have been looking into it. More than 9,000 Shincheonji members have been put under quarantine, and the government plans test all of them for the virus.

Critics say the disease may have spread within the church quickly because of the way that it worships. “Shincheonji followers hold services sitting on the floor, without any chairs,” packed together “like bean sprouts,” says Shin Hyun-uk, director of the Guri Cult Counseling Center, an organization in Gyeonggi Province that works to extract members from the church. Shin was a member of the Shincheonji group for 20 years, managing the church’s Bible studies instructors, until 2006.

“A bigger problem is that they shout out ‘amen’ after every sentence the pastor utters, pretty much every few seconds. And they do that at the top of their lungs,” sending respiratory droplets flying everywhere, he adds. These droplets are believed to transmit the coronavirus.

He says that group members proselytize in secret, without revealing their identity. This is because many Koreans are wary of the group and its reputation. As a result, this makes it difficult for people who may have been targeted to know whether they’ve been in contact with a member of the sect. “Because Shincheonji members cannot reveal themselves, they make it impossible for others to be cautious and self-quarantine themselves.”

Critics allege that the church obstructed the coronavirus investigation by not cooperating with health authorities. A petition on the presidential website, which has garnered more than half a million signatures, calls on the government to forcibly disband the group.

A spokesman for the Shincheonji group said in a videotaped statement over the weekend that the church is fully cooperating with health authorities, shutting down some 1,100 churches nationwide and sharing lists of followers with authorities to help track down and quarantine potential coronavirus cases.

The statement also said that the group was a victim of the virus and called for the public and media to refrain from unfairly criticizing it.