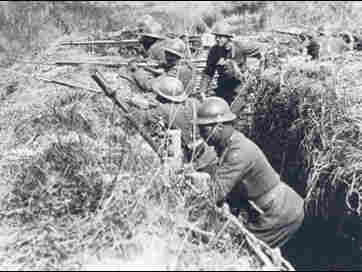 Soldiers of the 369th Infantry practice in France during World War I. They are wearing French “Adrian” helmets and using French issued rifles and equipment.

In the weeks following Iran’s Jan. 8 ballistic missile attack on the Ain al-Asad airbase in Iraq, 110 American service members deployed there were diagnosed with what has been the signature, albeit invisible, wound of the wars in Iraq and Afghanistan: traumatic brain injury caused by concussive blasts from exploding weapons.

Even if they were all wearing combat helmets, they and more than 400,000 other U.S. troops diagnosed with TBI over the past two decades lacked equipment that was specifically designed to protect their brains from the blast of shock waves.

That’s because ever since the first modern combat helmet came out in 1915, these so-called “brain buckets” have been designed to protect heads not from invisible shock waves, but from shrapnel, bullets and other blunt physical objects.

In fact, a recent study done by a team of Duke University researchers finds that the 105-year-old “Adrian” helmet used by the French army in World War One can provide better blast protection than the Advanced Combat Helmet (ACH) widely used by the U.S. military.

“That was very surprising, actually,” says Joost Op ‘t Eynde, the Belgian bio-engineering doctoral candidate at Duke who led the research project comparing three separate WWI-vintage helmets with the ACH model. “It was only after the tests that we saw that the modern helmet was not better. And then we saw that, in certain scenarios, the French Adrian helmet had performed better.”

It was only when those helmets were exposed to overhead blast waves that the 1915-era Adrian helmet outperformed the others. The Duke researchers point to the raised metal crest running from the front to the back of the Adrian helmet — a design feature also found on helmets used in those times by French firefighters — as a likely explanation for its superior protection from overhead blasts.

“The geometry of the helmet can make a big difference,” says ‘t Eynde. “I’m not sure a crest or something like it would work with a modern design, but just being aware of how the geometry might affect the way that the head and the brain might experience a shock wave is definitely something that I think should be kept in mind in helmet design.”

But a 2014 National Academy of the Sciences study notes that while the Kevlar-based ACH helmet is a significant evolution from its WWI predecessors, the principal approach to helmet design remains protection from striking objects.

“The protection of the warfighter afforded by helmets from threats ranging from bullets, shrapnel, blasts, vehicle collisions, and parachute landings has improved with improved helmet design and materials,” the report’s authors write. “However, the level of protection from nonfatal brain tissue injuries, which may have health consequences beyond the acute phase, is not known.”

An Army officer with the Program Executive Office Soldier branch that manages protective gear says a research gap explains why there has not been more progress in designing a blast wave-resistant combat helmet.

“How much of a blast wave is too much? It’s not well-defined,” says Lt. Col. Ginger Whitehead, the product manager for soldier protective equipment. “It goes back to the medical community not establishing a correlation of injury to the blast wave.”

Others, though, insist that a lack of a complete understanding of how blast waves affect the brain should not be an obstacle to coming up with helmets that do a better job of shielding soldiers’ brains.

“It’s not that you need to know exactly what the medical condition is that results from a blast wave of a certain amount of force,” says University of Rochester physicist Eric Blackman, who co-authored a 2007 study examining the need for better TBI protection in combat helmets. “You really need to protect the force from getting in the brain in the first place, and you can do that without knowing exactly what the medical symptoms are.”

Retired Gen. Peter Chiarelli has devoted much of his time since leaving active duty in 2012 as vice chairman of the Army Chiefs of Staff to advocating a better understanding of war-related TBI.

“We’ve spent billions of dollars — I did, as vice chief of staff — researching traumatic brain injury and post traumatic stress, and we really haven’t gotten much return on that investment.,” says Chiarelli. “And I would argue it’s not necessarily the money that makes the most impact — it’s groups of researchers that are willing to work together, share data, learn from each other, and when they go down that path that doesn’t work, they tell each other rather than try to hide that from each other.”

The University of Rochester’s Blackman, for his part, is convinced a combat helmet that more fully protects against TBI is both necessary and possible.

“There needs to be some kind of prioritization with very specific goals,” he says. “Bring people together — it will happen if there’s a concerted effort toward it. If you think of something like the Manhattan project (that produced the first nuclear weapon during World War Two) for this, that’s what’s lacking.”

While 100 percent protection may not be possible against blast waves, Blackman adds, the superior performance of a century-old combat helmet should be a reminder that there is ample room for improvement.