The best homemade Apple Cider Vinegar Salad Dressing! Super quick and easy to make and tastes so much better than bottled. 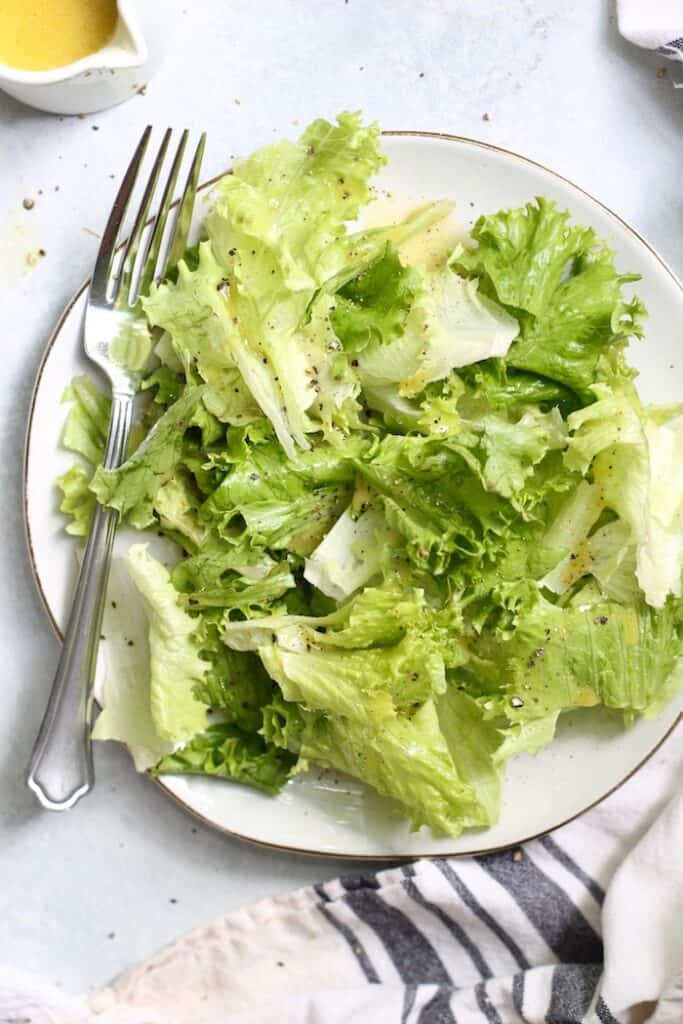 My fiancé Jeff kinda sorta made me fall in love with salad all over again.

Like, I was never one to make a side salad with my dinner. It sounded annoying. And aren’t they always better from restaurants anyway?!

No siree! Having been with Jeff for almost four years, I’ve eaten quite a few salads with dinner. He’s the reason we have a salad spinner (which we use ALL THE TIME).

He’s also the reason I’m now inspired to have fabulous salad dressings like today’s ridonculously good apple cider vinegar one or my amazing balsamic vinaigrette on hand at all times.

Because making salad is actually so darn quick and simple. And who doesn’t need some extra veggie oomph in their life?!

Now that I’m so used to taking the whopping three minutes it takes to make dressing, I can’t imagine buying it at the store. It just doesn’t taste the same as homemade! Prepare to be converted. 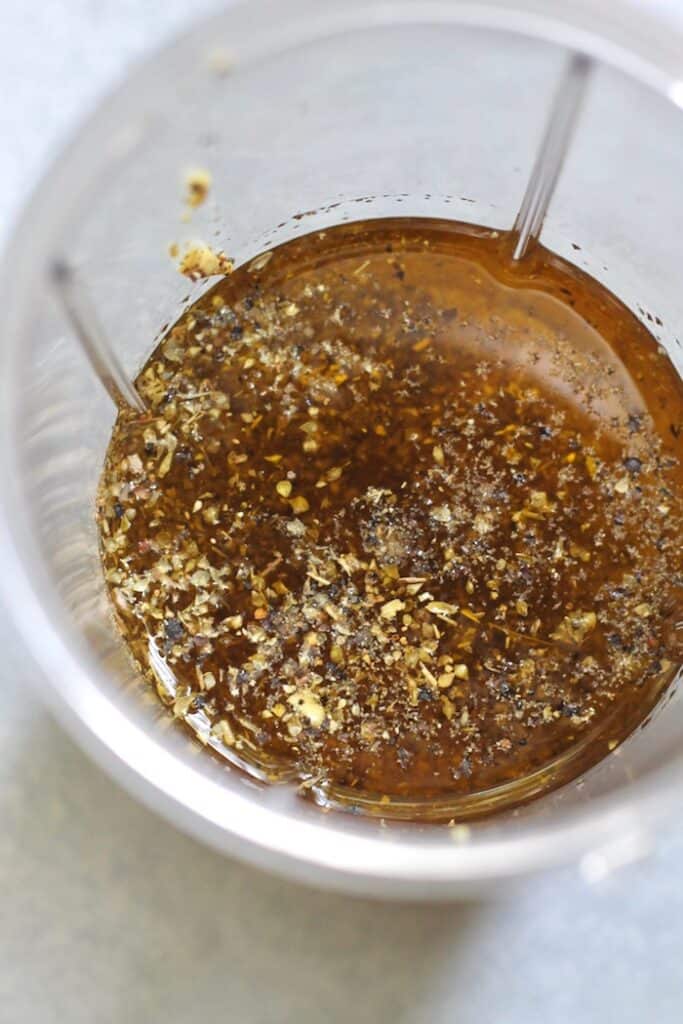 How we make our nightly salad:

Our salad process goes something like this. Every week, we buy a couple heads of organic green or red leaf lettuce. We like that it has crunch but is still a softer green. We wash it and then spin it dry in our handy dandy salad spinner.

Trust me…if you don’t want to use a zillion paper towels to dry your lettuce, get yourself a salad spinner.

We refrigerate any extra lettuce in the salad spinner bowl itself. When we want salad. we mix some greens in a mixing bowl with a good drizzle of dressing, a pinch of salt and pepper, and whatever other veggies we have on hand, like cucumbers or tomatoes.

Using a big bowl to toss it is key so everything is nice and coated!

We always keep homemade dressing like this apple cider vinegar one in the fridge so there’s no excuse to not have salad at night! 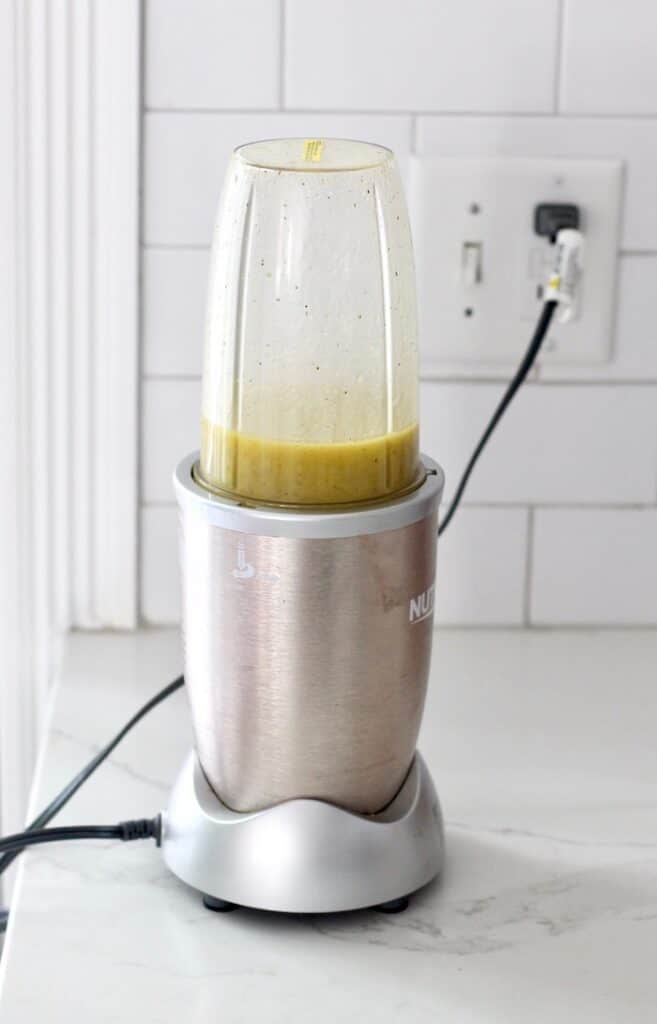 How to make homemade salad dressing:

I make dressing so often that I don’t measure anymore. I start off with the essentials: oil and vinegar. I always do more extra virgin olive oil than vinegar.

Then I add a squirt of Dijon mustard, a couple chopped garlic cloves, a glug of maple syrup, and plenty of salt and pepper. Sometimes I’ll add fresh basil or dried oregano if I want a Mediterranean flair.

Sometimes I’ll nail it on the first try and sometimes I blend and then add more to taste.

Speaking of blending, I highly recommend using a blender (I use my Nutribullet) because it makes the dressing super creamy and emulsified in a way that whisking doesn’t.

You can also put it in a jar and shake it!

Oils winterize or solidify in the fridge, so don’t fret if your dressing is thicker once refrigerated. Simply let it come to room temp or even throw it in the microwave for a few seconds. 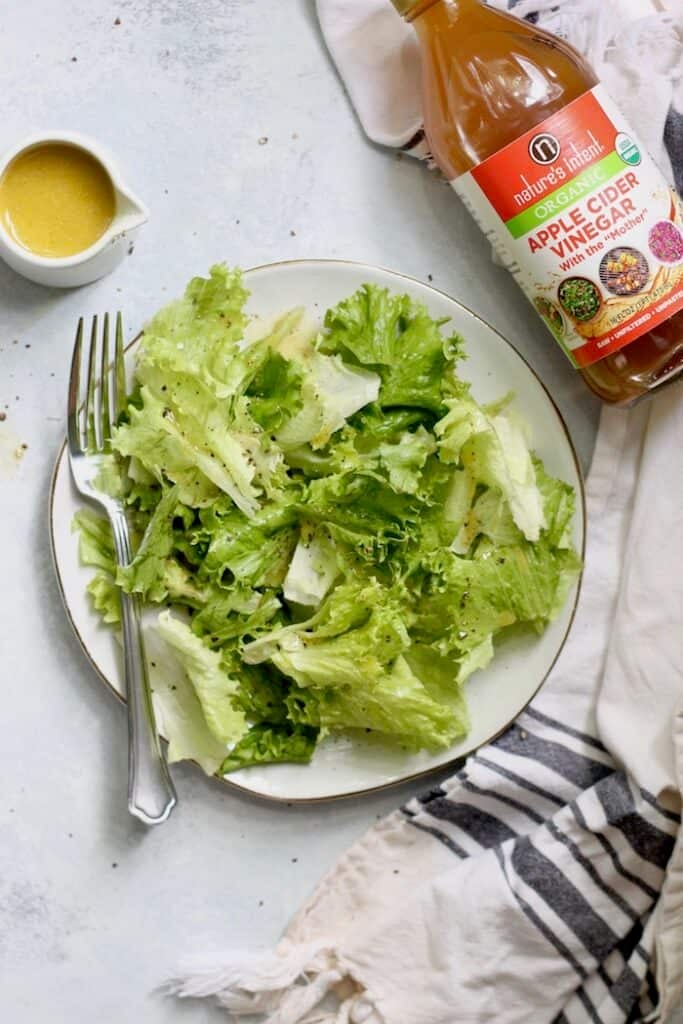 Which apple cider vinegar is best?

Bright and tangy apple cider vinegar not only tastes fabulous, but it’s also good for you, too! Aim for one that’s raw and unfiltered like Nature’s Intent Organic Apple Cider Vinegar, which contains the “Mother.” You can find it at Kroger!

The “Mother” is the brown, murky stufff in raw ACV. It’s simply a colony of beneficial bacteria that turns alcohol into vinegar. Filtered ACV removes the mother so only a clear liquid remains.

I love the unique depth and flavor that this ACV brings not only to salads, but entrees and drinks, too. I especially love adding a splash to brighten up soup!

The best part is that Nature’s Intent is a family-owned company that’s been brewing vinegar for eight generations. How cool is that?

Did You Make This Recipe?
Let me know by leaving a review or tagging @hummusapien on Instagram!

This post is sponsored by Nature’s Intent. Thanks for supporting the brands that make Hummusapien possible!