Tips For Skiing At Wintergreen

This past weekend we took Mazen skiing for the first time! We are lucky to live so close to the mountains, so we headed to Wintergreen Ski Resort about 45 minutes from Charlottesville for a day trip. We left Birch at home with the best Nona a family could ask for! Thomas spent years up on the mountain snowboarding with his buddies and worked as a snowboard instructor, so he was excited take us for the first time. Here are our tips for skiing at Wintergreen! 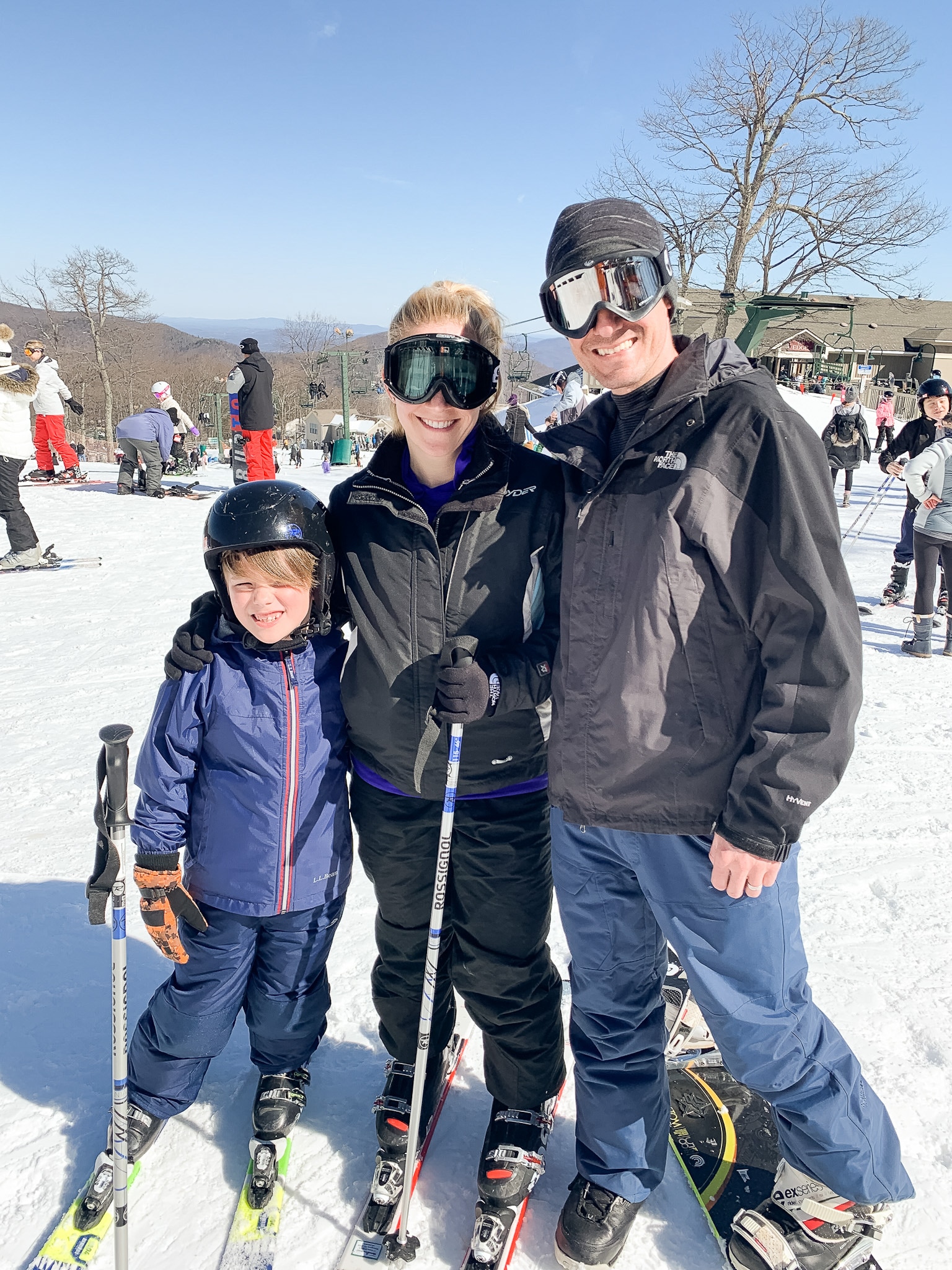 Ideally we would have gone on a weekday, but multiple factors, including having a full-day babysitter for Birch, meant that we needed to brave the Saturday crowds. We were up before sunrise and out the door by 7:30 to arrive well before 9. We had easy parking and short-ish lines. Thomas owns all of his equipment, but Mazen and I had to rent ours, so we were glad to get through the equipment lines relatively quickly. We were on the slope around 9!

2 // Book lessons a month in advance

We had hoped to put Mazen in the Treehouse Ski School, as it came very highly recommended by friends. The kids learn to ski from 9am – 3pm with breaks for hot cocoa and lunch. And the parents get a little day date on the mountain. But when we called the week before we found out that ski school had been booked for a month and the private lessons were full too! Lesson learned. At least we saved a chunk of money doing it ourselves. 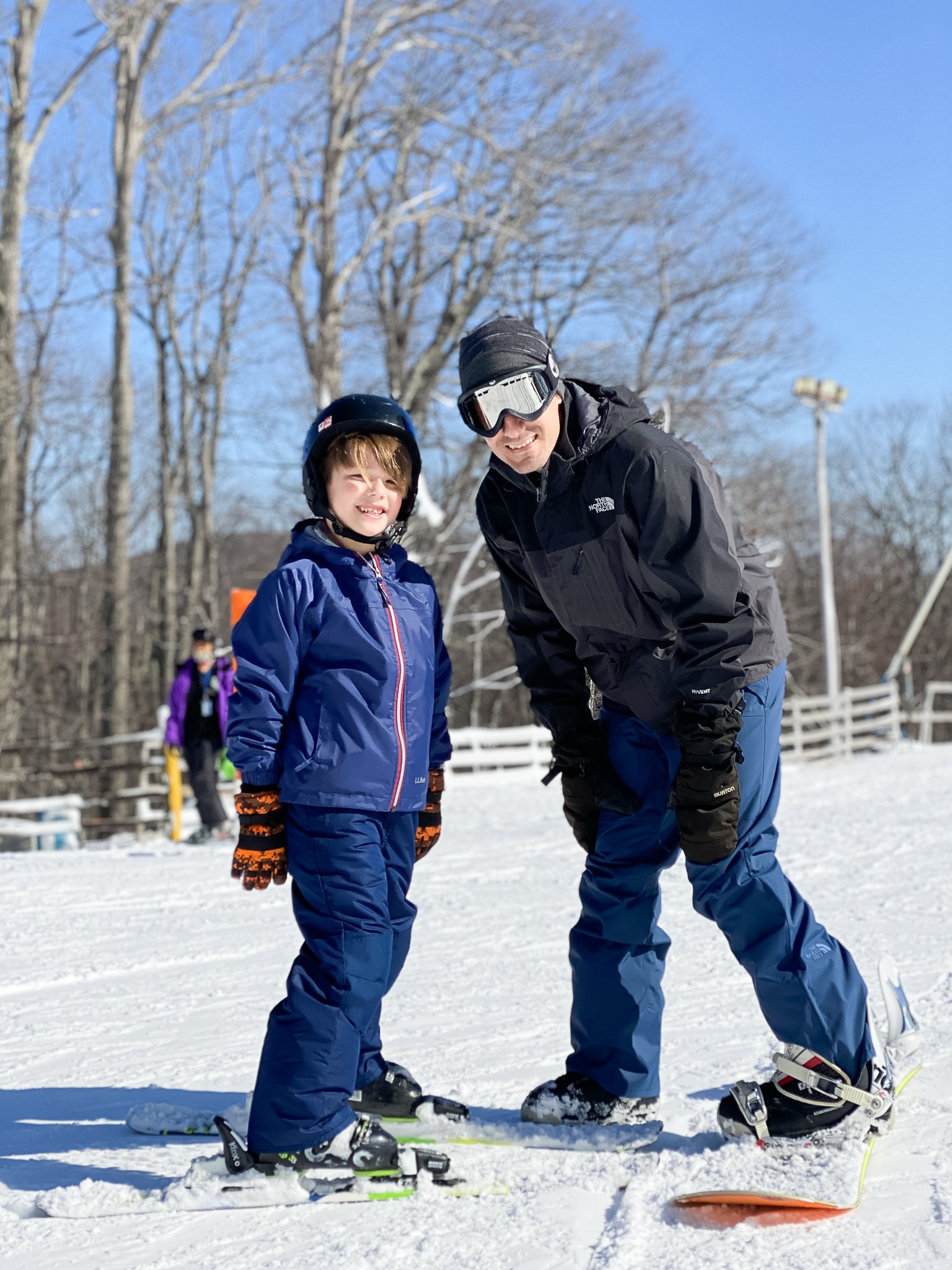 This Southern gal isn’t the most snow sport experienced. I’ve skied only a handful of times in my life. It had been 12 years since I last hit the slopes! I thought it would be “fun” to snowboard like Thomas. After all, I’m a lot better at wakeboarding than water skiing. HAHAHA. I basically ripped open every muscle in my body in one hour. It was much harder than I was prepared for, and 10x harder than wakeboarding on a lake. When every inch of my body was shaking with exhaustion, I decided to switch to skis. I would be willing to try it again because I was just starting to get the hang of it when I got too tired (toe edge, at least), but I think I should probably just stick to what I know. I really thought I was about to rip my knee open!

This is the only pic I snapped of me on the snowboard – flat on my bum! 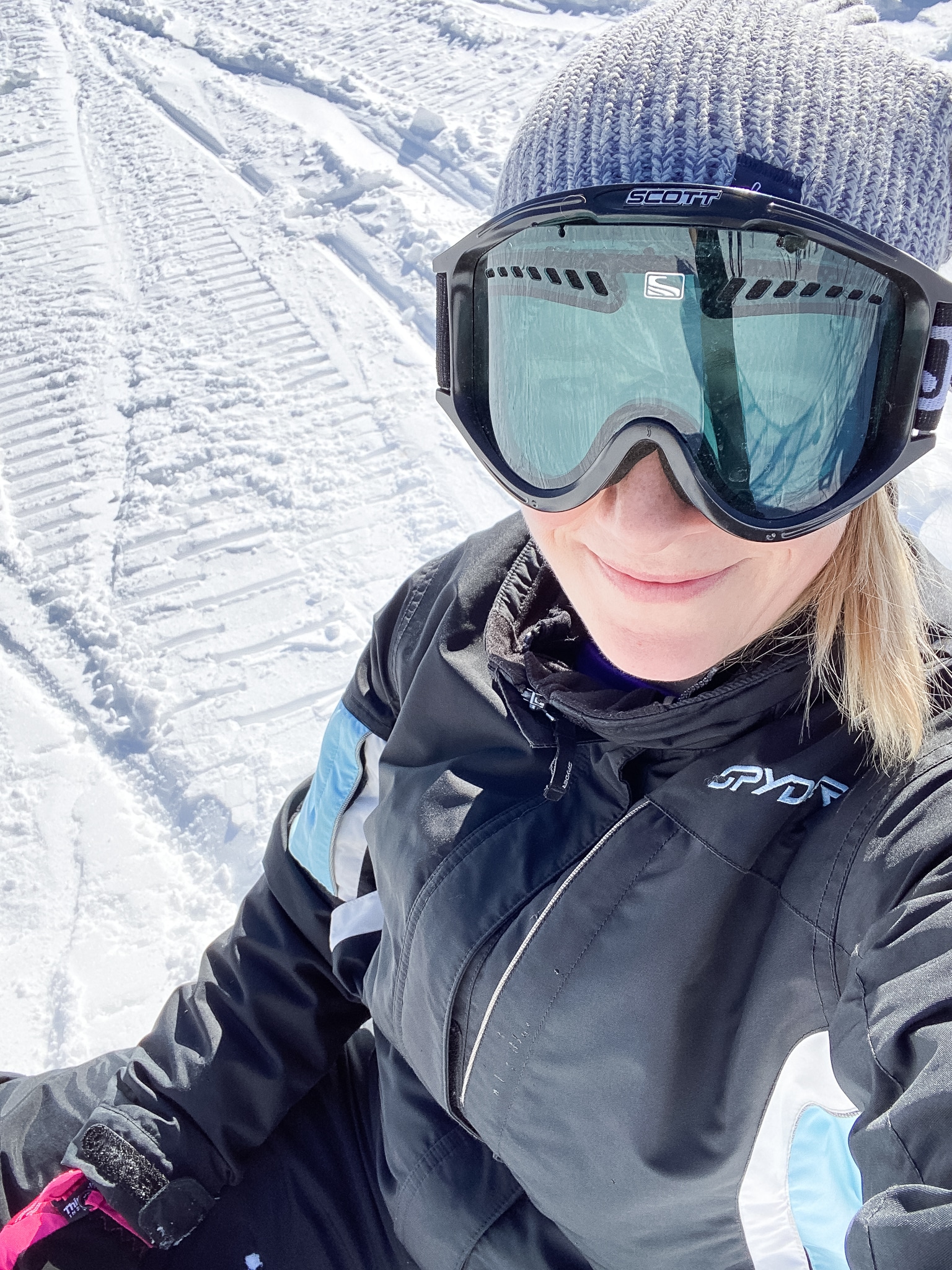 Mazen was very cautious getting started, but he did a great job listening to instructions and making his pizza. I thought he would go a little faster and fall more, but he went very slow and didn’t fall much. His personality is anti-risk like mine! Thomas was so patient with us both standing around when I’m sure all he really wanted was to snowboard at top speed. 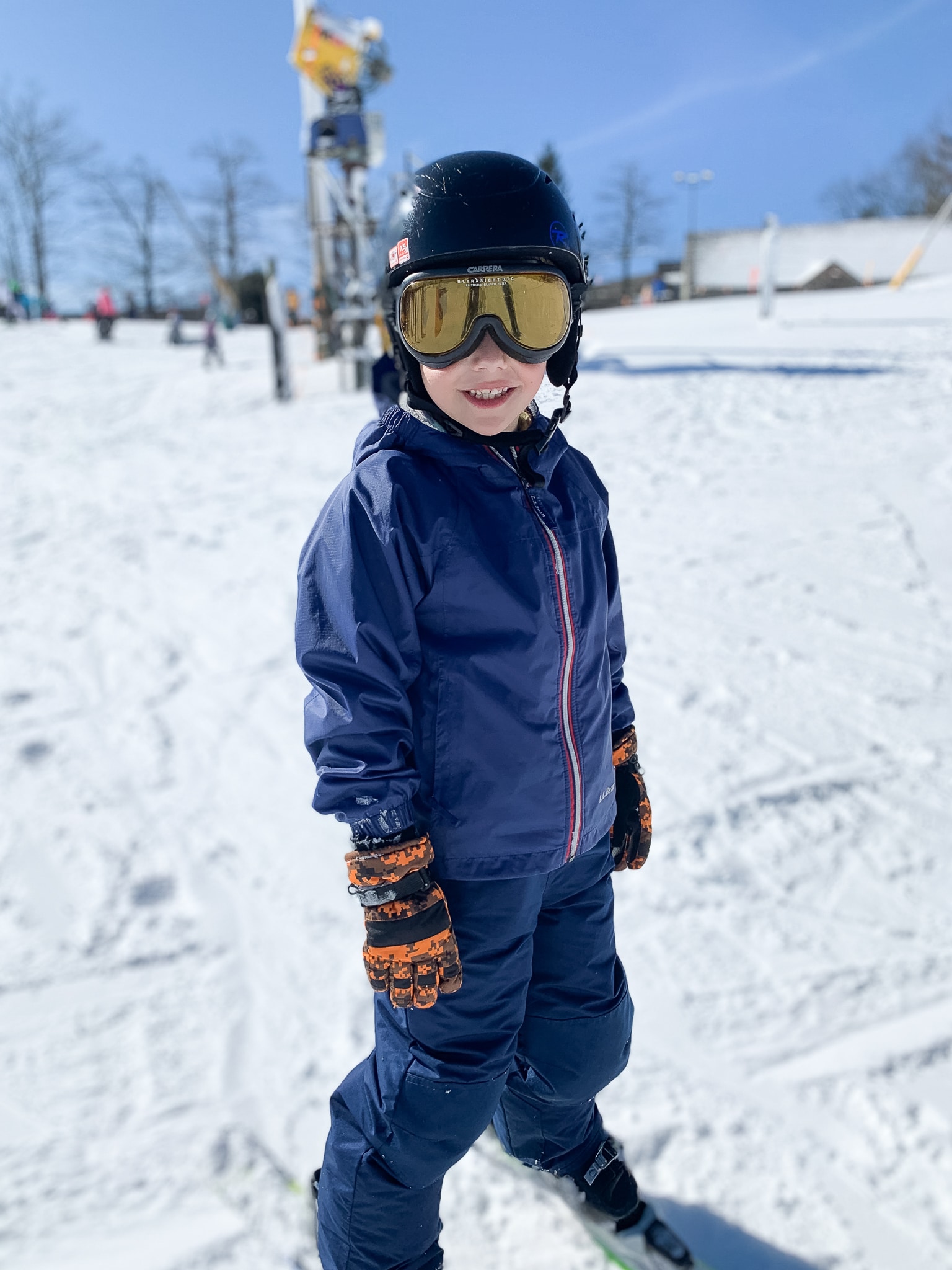 We picked a perfect day for a ski day. I had on 1,000 layers and could have been down to one layer by the of the day. My base layer was soaked in sweat! When we arrived they were blowing snow and we were glad we brought hats, googles, and waterproof gloves. When we left it was almost 60 degrees and hot enough for outdoor dining! The snow was blinding, and I was glad to have both UV goggles and an extra pair of sunglasses, plus sunscreen! It would have been nice to have something neon for each of us to wear because it was really hard to spot each other on the slopes. 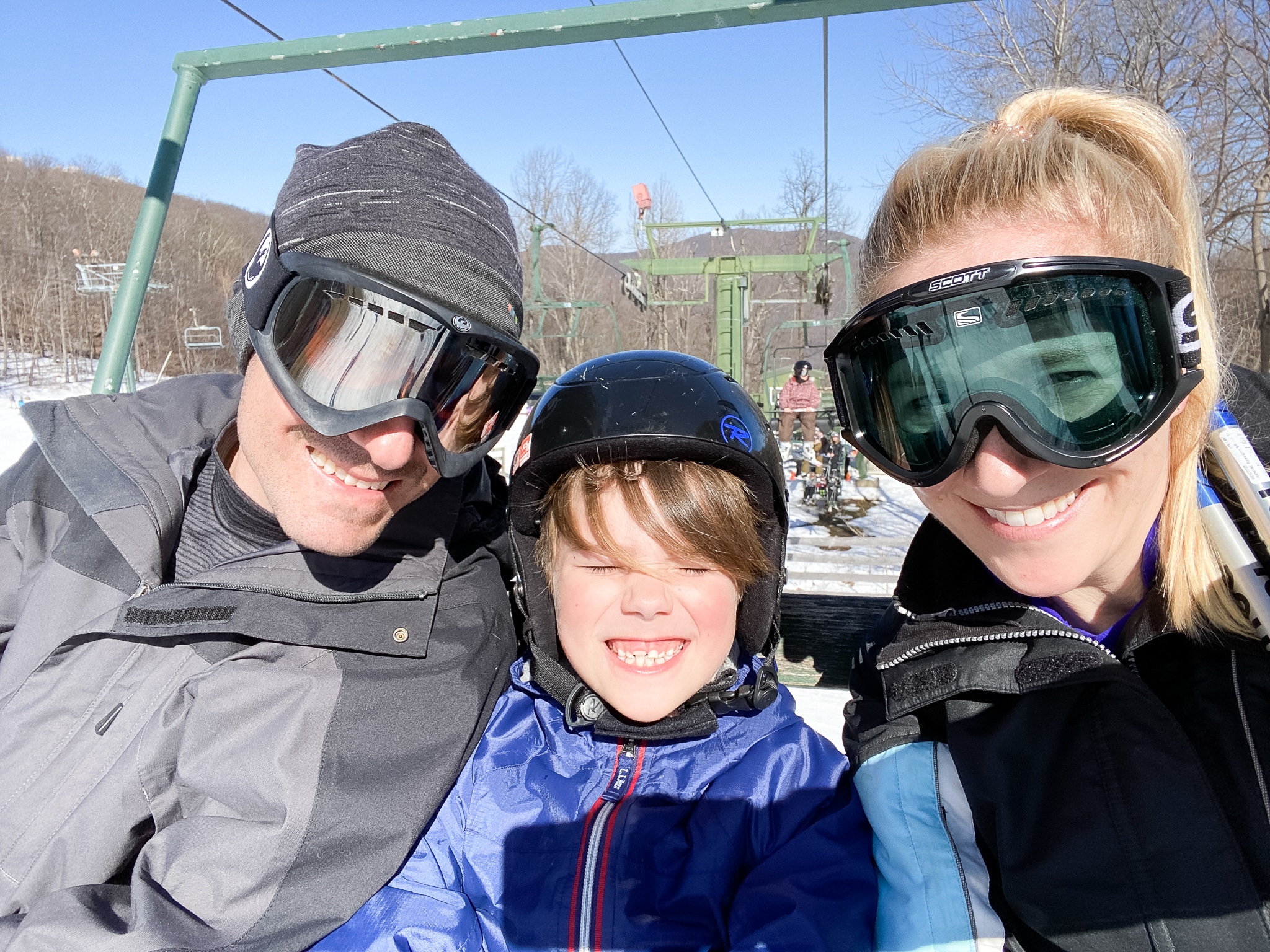 Hide an inexpensive water bottle outside somewhere. I was SO THIRSTY and there aren’t exactly water fountains in the trees. It was too hard to take everything off to go inside and you can’t really carry around a water bottle. Next time I’ll tuck one near the lodge fence.

5 // Pack a lunch and have dinner at Blue Mountain Brewery!

Next time we might pack a lunch because are burgers and chicken fingers we had at The Copper Mine weren’t great. The Checkerberry Cabin at the bottom of the green slope had a decent menu, but not much in the seating range. But it was nice to sit down inside for a little while. 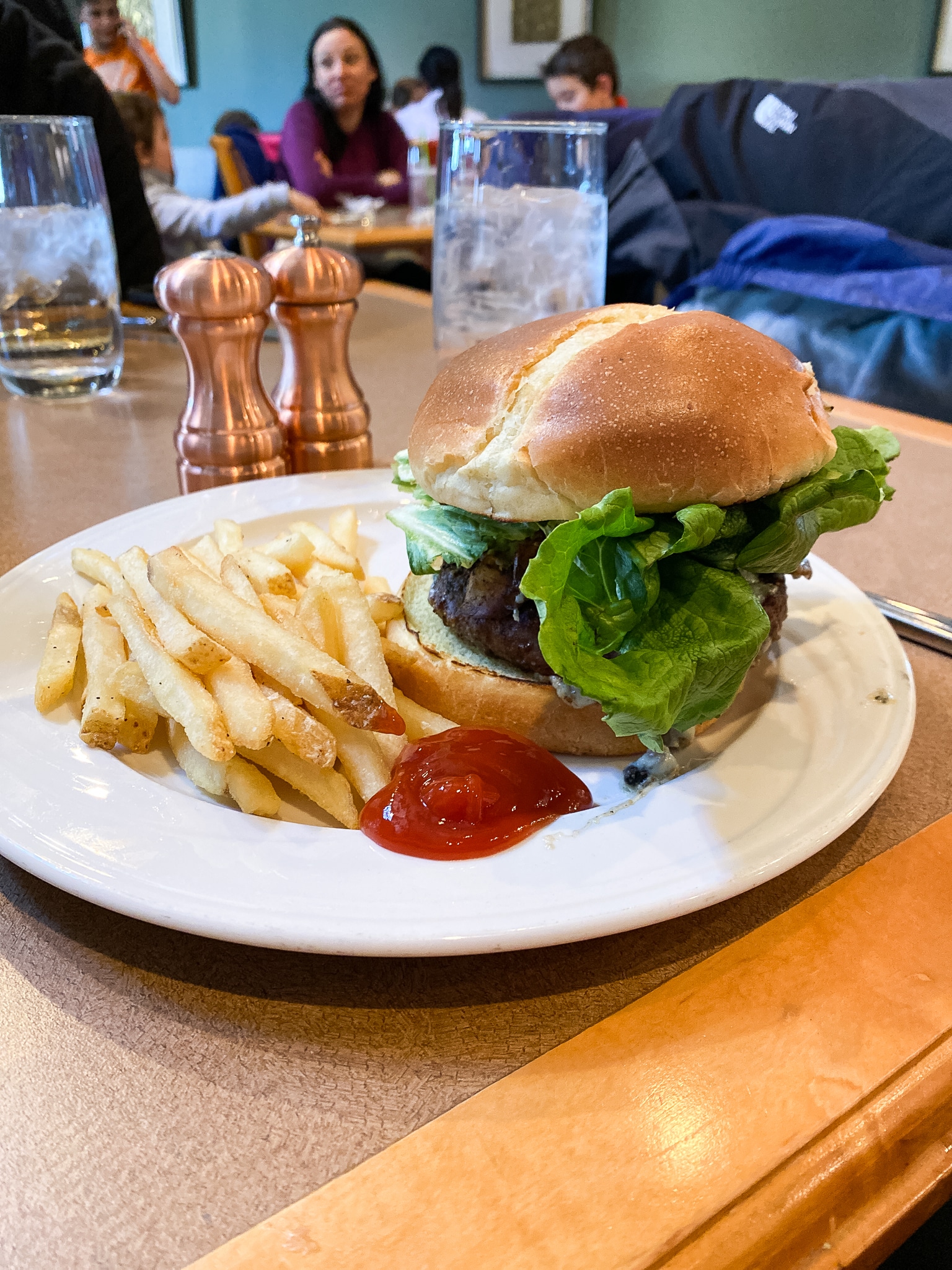 But Blue Mountain Brewery, on the way home to Cville, is a spot not to miss! We had an early dinner with beers and the best local sausage pizza before heading home. 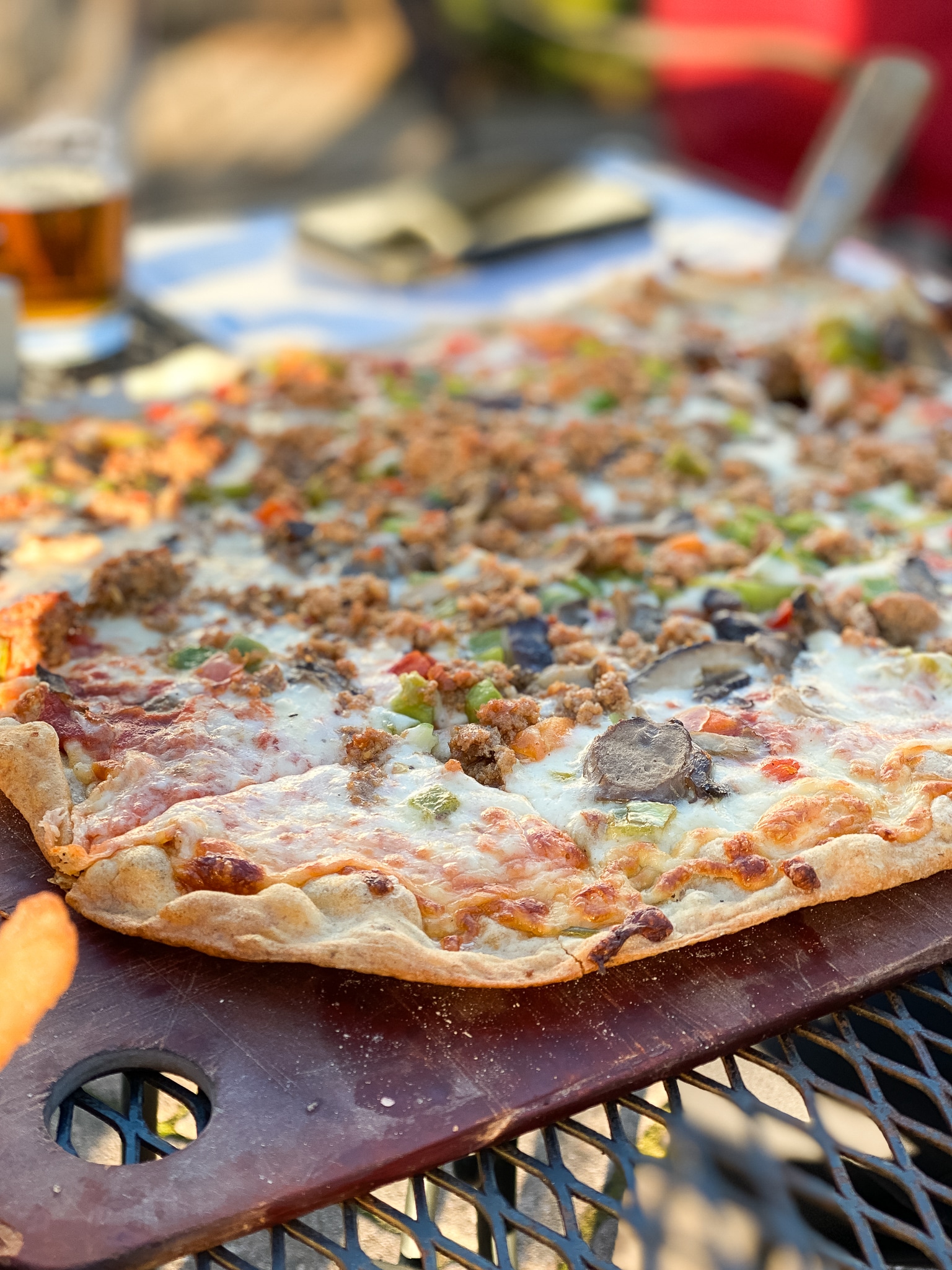 By the end of the day Mazen was able to go down the whole beginner slope without stopping and didn’t want to leave! We are hoping to get in one more mini ski day before the season ends. 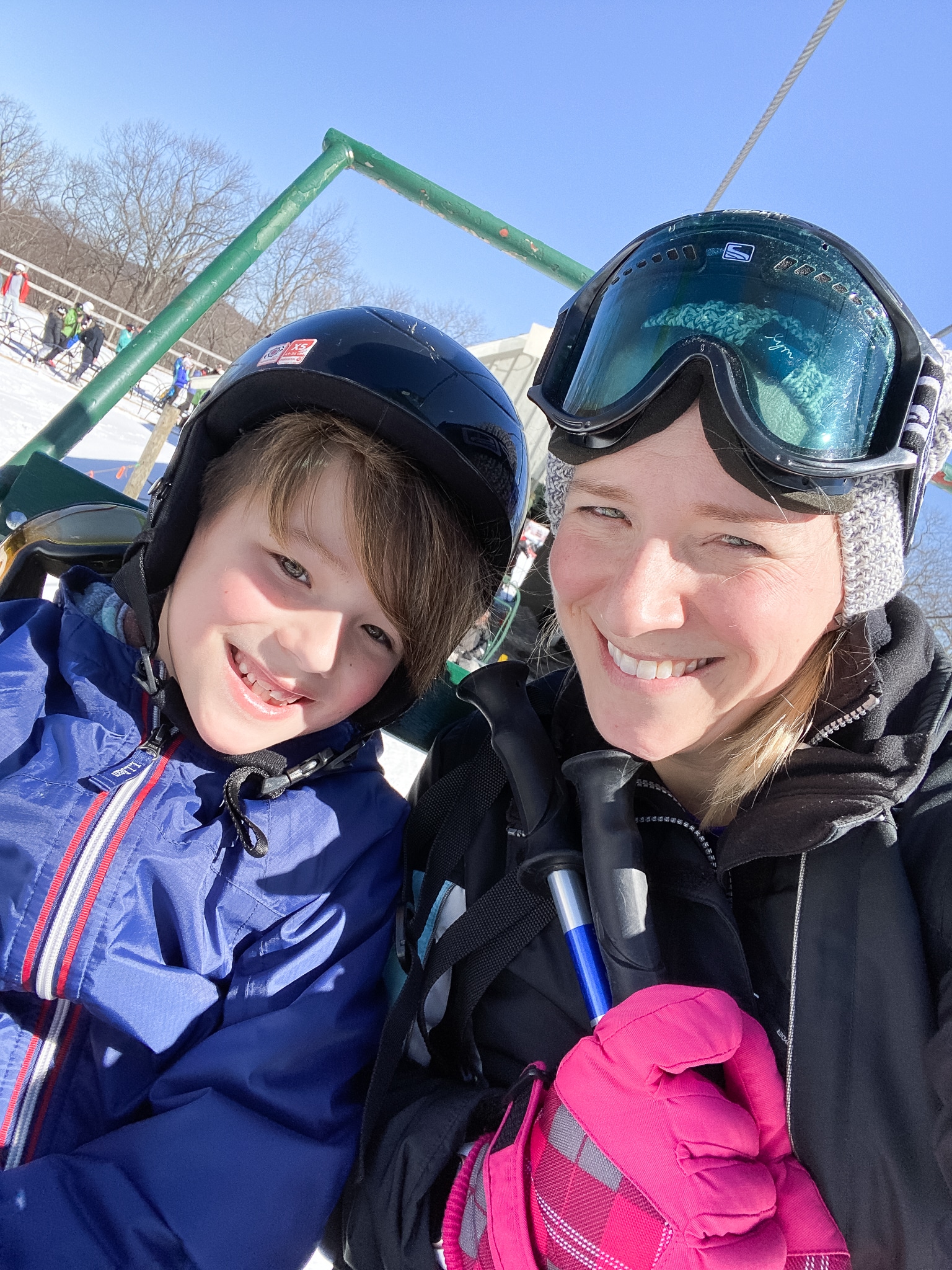 Those of you who are ski pros – what are your tips?

ShareTweet
Comments Off on Tips For Skiing At Wintergreen