Trusting Injection Drug Users With IV Antibiotics At Home: It Can Work 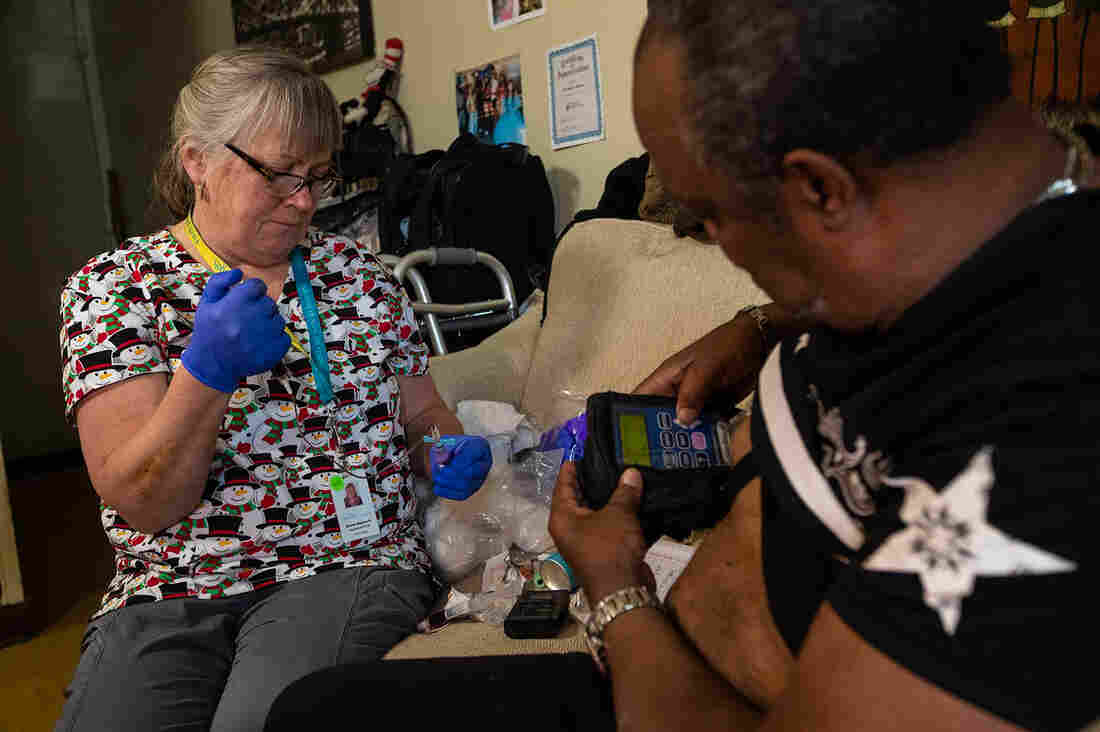 Arthur Jackson (right) gets blood tests during home visits in Boston from nurse Brenda Mastricola. He’s also getting intravenous penicillin to treat a serious bone infection in his foot. The medication’s pump is connected to an indwelling IV catheter. It’s still uncommon for patients with a history of injection drug use to be sent home with an IV. 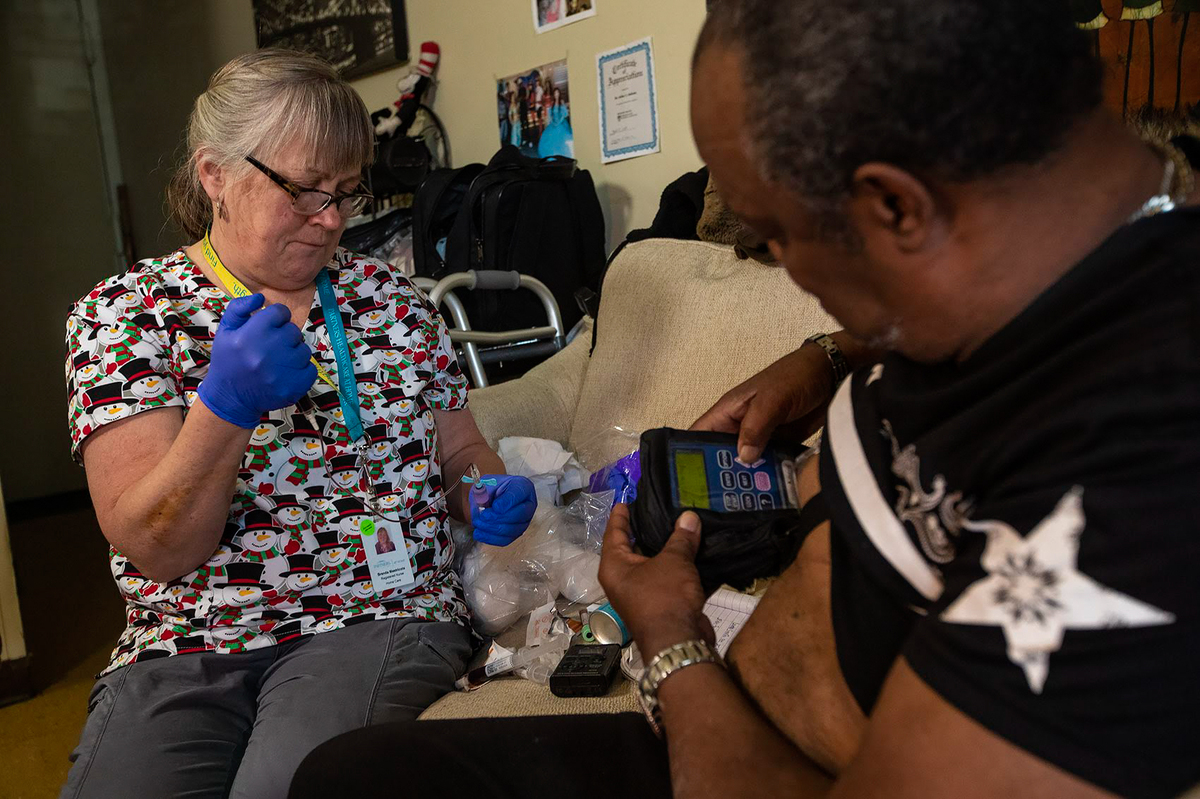 Arthur Jackson (right) gets blood tests during home visits in Boston from nurse Brenda Mastricola. He’s also getting intravenous penicillin to treat a serious bone infection in his foot. The medication’s pump is connected to an indwelling IV catheter. It’s still uncommon for patients with a history of injection drug use to be sent home with an IV.

Two mornings a week, Arthur Jackson clears space on half of his cream-colored sofa. He sets out a few rolls of tape and some gauze, then waits for a knock on his front door.

“This is Brenda’s desk,” Jackson says with a chuckle.

Brenda Mastricola is his visiting nurse. After she arrives at Jackson’s home in Boston, she joins him on the couch and starts by taking his blood pressure. Then she changes the bandages on Jackson’s right foot. His big toe was amputated at Brigham and Women’s Hospital in November. A bacterial infection, osteomyelitis, had destroyed the bone.

Jackson is still taking intravenous penicillin to stop the infection. He came home from the hospital wearing a small medication pump. It delivers a steady dose of penicillin via a PICC line. A PICC line (for Peripherally Inserted or Percutaneous Indwelling Central Catheter) looks sort of like a flexible IV tube, inserted into Jackson’s chest.

“This all looks good,” Mastricola says, after checking to make sure the line is clean and in place. “You don’t need me.”

When patients need weeks or months of IV antibiotic treatment, but otherwise don’t need to be hospitalized, the standard protocol is to discharge them with a PICC line, and allow them to finish the medication at home. It saves money and is much more convenient for the patients.

But this arrangement is almost never offered to patients who have a history of addiction. The fear is that such patients might be tempted to use the PICC line as a fast and easy way to inject drugs like heroin, cocaine or methamphetamine.

Jackson, who is 69, was addicted to heroin for 40 years. Although he’s been sober for years, most U.S. hospitals would force patients like Jackson to stay in the hospital, sometimes for eight weeks or more. But Jackson’s hospital, Brigham and Women’s in Boston, along with just a few others in the U.S., is challenging that protocol, allowing some patients to go home anyway. They argue doing so boosts the chances these patients will stay on their antibiotics and beat the infection.

A small team of Brigham doctors and nurses started planning this very unusual option shortly after opening the Bridge Clinic, a walk-in clinic in Boston for patients who are seeking treatment for a substance use disorder.

Dr. Christin Price, one of the clinic’s directors, says virtually every patient who injects drugs develops some kind of infection. It’s difficult to avoid injecting bacteria into the bloodstream when using drugs in an alley or a public bathroom. 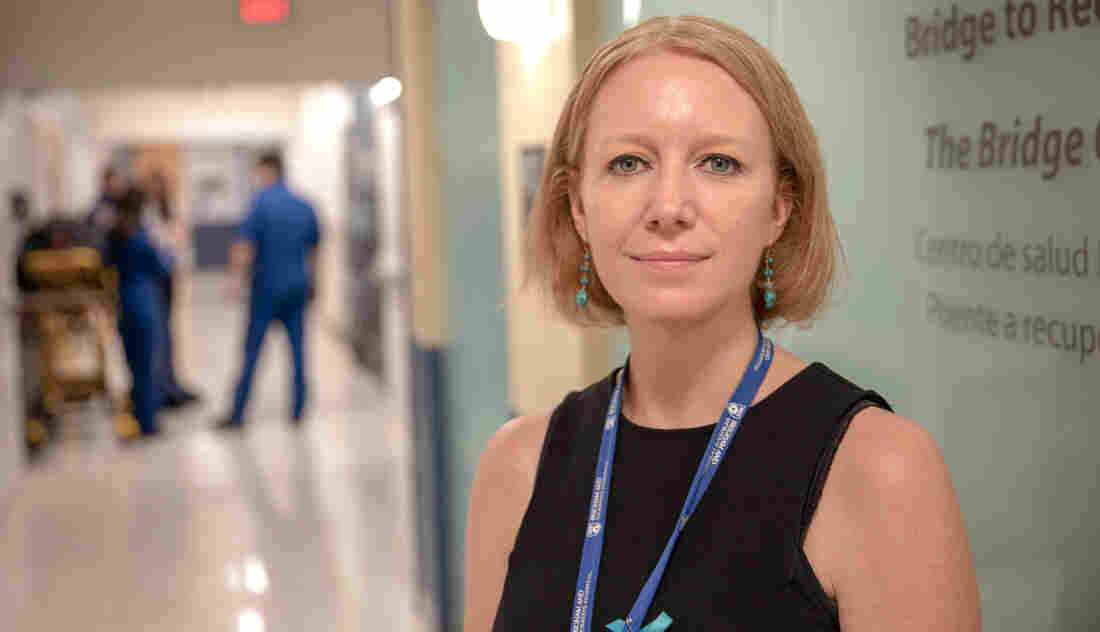 Dr. Christin Price runs the Bridge Clinic at Brigham and Women’s Hospital in Boston. “A lot of people did sort of look aghast,” Price says, when she and her colleagues first suggested their patients could handle getting IV treatments at home.

The national opioid epidemic has led, in many cases, to a parallel increase in diseases related to injection drug use, such as HIV, hepatitis C and bacterial infections of the heart and bones. A study of North Carolina hospitals found a 12-fold increase in cases of the heart infection endocarditis between 2010 and 2015.

“Every time someone uses injection drugs, they’re putting themselves at risk for a very complicated infection,” Price says.

Treatment options for endocarditis patients with a history of drug use are limited. Some skilled nursing facilities, home care agencies and antibiotic infusion companies won’t work with these patients once they’re released from a hospital. But Price says some of her patients aren’t willing to remain in a hospital for weeks on end, just to finish a round of IV antibiotics.

“They kind of get stir crazy,” she says. “You can imagine it’s almost like being held captive for six weeks, especially when you’re feeling fine now because the infection is clearing. A huge problem is that some of them can’t last — and so they leave before the six weeks are over.”

Patients who don’t complete their course of antibiotics can end up with a recurring infection and a repeat trip to the hospital.

Price and colleagues began months of discussions with specialists in heart, bone and joint conditions, seeking buy-in from surgeons and nurses, so their patients could participate.

“A lot of people did sort of look aghast,” Price says. “It was just their policy that people with a history of injection drug use would not go home.”

When Dr. Daniel Solomon encountered those looks, he says he’d remind colleagues “that the alternatives aren’t that good either.” Holding patients for weeks in a hospital room is hard on both the patients and medical providers, he says. And if patients want to use drugs they’ll find a way to do it, even in a hospital bed.

In the spring of 2018, Price and Solomon and others enrolled a few of the first qualified patients, then a few more — intentionally cherry-picking those who wanted to be in treatment and who had a sober, stable home.

‘I’m not going back’

Arthur Jackson says there shouldn’t have been any question that he met the first and second requirements. He’d been on methadone for 10 years, used heroin again, then switched to Suboxone, a version of buprenorphine that he’s been taking for two years. In fact, Jackson says he was insulted when one of the doctors presented the home treatment option to him, but said she was worried the PICC line might entice him to inject heroin.

“Stop right there,” Jackson recalls telling the nurse. “When it comes to my recovery, I’m serious because I’ve done so much to lick this this thing.”

Not that Jackson didn’t consider it.

“First thing I thought was, ‘Oh, I could inject heroin in here easily,’ ” Jackson says. “But I dismissed that thought because I’m not going back” — back to winters on the streets, and living from one heroin fix to the next.

Other Bridge patients scoff at those concerns about PICC lines.

“Everyone makes such a big deal about this PICC line,” says Stephen Connolly, 36, who went home with the open port last year, while being treated for endocarditis. “If I want to get high, I know how to do it. I’m not going to mess around with a PICC.” 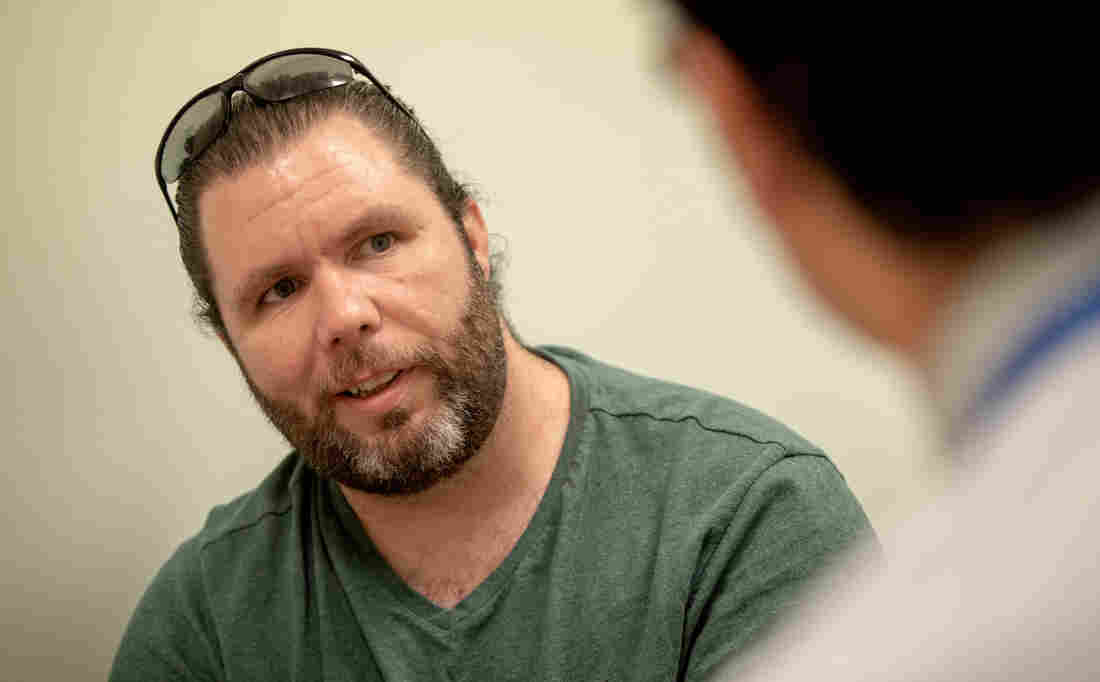 Stephen Connolly successfully completed home IV treatments for a heart infection while staying with family members. “If I want to get high, I know how to do it,” Connolly says. “I’m not going to mess around with [an indwelling catheter for antibiotics.]”

Connolly says when he first came to Brigham and Women’s Hospital he was focused on his heart, ignoring his other disease: addiction. Connolly says he was surprised when every doctor he saw, even his cardiologist, wanted to talk about addiction.

“I’m like, ‘listen dude, my heart’s falling apart here, so let’s hold up with the drug talk,” Connolly recalls. He assured the cardiologist he had his addiction under control.

“Obviously I didn’t, but my mind tells me that. It’s just crazy.”

Connolly finished his antibiotic treatment while staying with family members in Abington, Mass.

Nevertheless, a few other hospitals are testing ways to continue outpatient treatment for patients who don’t have a stable home. In Portland, Ore., a medical center tried providing IV antibiotics inside addiction treatment programs. A hospital in Kentucky combines addiction treatment, counseling and outpatient IV antibiotics. In Vancouver, the Canadian national health program pays for small apartments, staffed with a nurse 24 hours a day, where patients can stay while they complete antibiotic treatment.

“People who use drugs deserve the same standard of care,” says Dr. Christy Sutherland, medical director at the Portland Hotel Society in Vancouver. “We can’t change what we offer as clinicians — to give people subpar treatment with the excuse that they are IV drug users.”

Arthur Jackson lives alone in his studio apartment, but he persuaded doctors he’d be better off there than in the hospital, so he could visit his 93-year-old mother daily, feed his tankful of tropical fish and his cat, and attend his regular Narcotics Anonymous meetings. 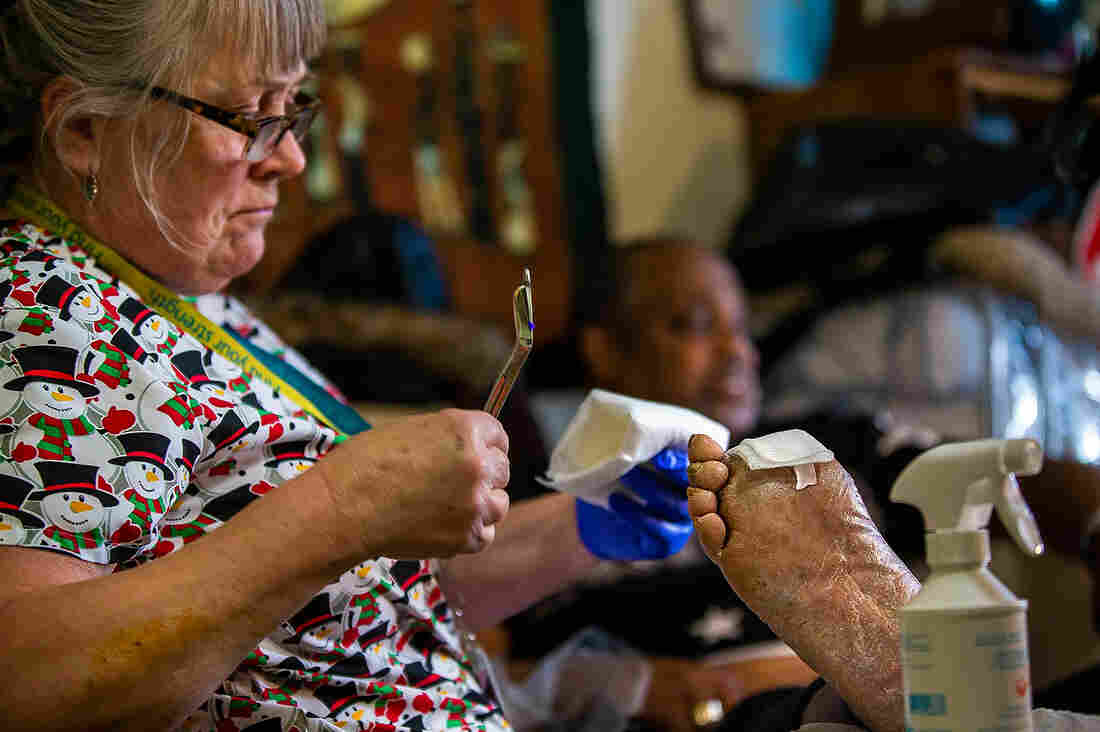 Nurse Mastricola tends to the still-healing wound on Arthur Jackson’s foot. He says his doctor initially worried he might be enticed to use the IV line to once again turn to heroin. But he’s been taking burprenorphine for two years, to prevent that. “I’m not going back” to that life on the street, he says.

Jackson is one of 40 patients with a history of drug use the Brigham team has discharged from the hospital, to complete IV antibiotic treatment at home. The team is paying particular attention to 21 patients within that group who, unlike Jackson, are active drug users. So far, these men and women have finished their antibiotic treatment via a PICC line with no complications. One had to be readmitted because he had trouble administering the antibiotics. Price says there were three patients who relapsed into drug use, but no one actually used the PICC line to inject illegal drugs.

“I think we’ve shown, through this pilot, that it is safe and feasible for certain patients,” she says.

Brigham doctors have not yet published these initial results in a medical journal, though they plan to. But already, Price says, the pilot program is helping to cut health care costs.

Taken as a group, the 21 high-risk patients who needed IV antibiotics spent 571 days at home rather than in a hospital or rehab facility — saving as much as $865,000 (based on estimates of $1,500 per hospital day.) That doesn’t include the cost of home care visits by a nurse.

ShareTweet
Comments Off on Trusting Injection Drug Users With IV Antibiotics At Home: It Can Work